The Clash at Hempstead

The natural world is intense. Every organism on this planet is a survivor, the latest in a successful bloodline stretching back to the first living things. The evolutionary arms race has honed a wide range of skills and strategies for competing in the constant battles for resources, mates, and safety. We tend to think of these struggles as removed from humanity’s rat race: awesome and ancient dances performed on the stage of the living environment. Predator-prey relationships, use of incredible adaptations, and chance meetings between different species all play out on a daily basis. Many people never know the thrill of the hunt or the limits of life’s endurance unless Sir David Attenborough delivers the scenes to their living room. If we know where to look, however, sometimes we’re lucky enough to witness these dramatic, wildlife documentary events right outside our doors.

My first day of spring break was gray with intermittent rain, but I chose to spend some time outdoors anyway. Brigid decided to accompany me to Hempstead Lake for a little sibling bonding time. It was a bit wet, but the weather improved throughout the morning. The foggy skies and the smell of the damp woods made reminded us of so many family camping trips, leading us to reminisce as we wandered the trails. Many of the usual suspects were out and about, and we found frogs, muskrats, chipmunks, and a variety of birds, including a briefly-heard Northern Parula. 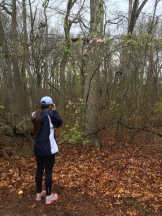 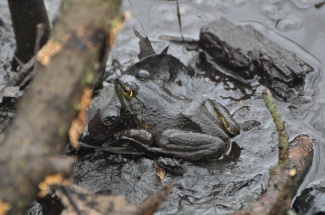 Spring is in the air

I led Brigid towards the preferred site for the local Great Horned Owl pair, hoping we could locate the roosting raptors. As we approached the spot, a trio of Common Ravens swept overhead, just above the treetops. I had just been telling Brigid that I’d already spotted one flying over Lynbrook earlier in the day, and I was surprised by this close encounter. As it turns out, the show was far from over. The squadron of black birds banked like fighter jets over the lily pond, swooping down to the canopy in formation. A war cry went up with a chorus of croaks as they locked on their targets: the resident owls. 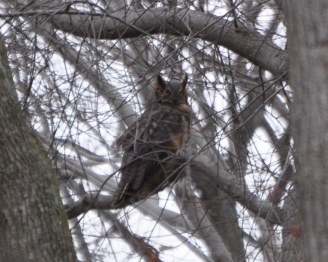 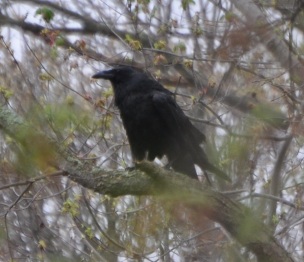 In one corner, a pair of fierce, nocturnal hunters. In the other corner, a team of clever, acrobatic opportunists. In measurements, the combatants fall in the same division: similar in size with ravens averaging slightly larger in wingspan and body size but owls packing a bit more weight. Mobbing behavior is common in the avian world. Smaller birds aggressively gang up on predatory species to discourage them from any sneak-attack funny business or to convince them to move elsewhere. Ravens are meat-eaters who often find themselves on the receiving end of these interactions, but there are few winged predators more dangerous than the Great Horned Owl. Under cover of darkness, birds as large as herons and hawks can feature on their hit list. Although they typically rest during the day, owls go on high alert when mobs form around them. Jays, crows, and smaller songbirds are definitely a nuisance, but the ravens were perceived as a more serious threat and treated as such.

Ravens are famously maneuverable in the air, capable of flying upside down and performing barrel rolls or loop-the-loops. The trio circled the owls, gliding through the tangled branches like X-Wings on a trench run. Their assault was punctuated by croaks, squawks, and deep, twanging bell calls as the birds communicated with one another and antagonized their targets. Owls are skilled flyers themselves, built to weave silently through the forest and ambush prey. Several times, the Great Horneds moved to new perches, whipping the ravens into a frenzy whenever they took flight. As the attackers got more riled up, they began to push their luck and take bolder steps. The ravens swooped closer and closer to the owls, and eventually two foes met on the same branch.

This moment was the climax of the spectacle. The other two ravens cawed incessantly from a safe distance away. Blue Jays and Fish Crows had joined the fray to mob the both of the larger species. I’m not even sure where the second owl was at this point, lost somewhere in the confusion of the fight. The brave bird on the limb inched nearer to its opponent, who stood tall and glared with fire in its eyes. A step too close, and the owl turned the tables. A symphony of squawks echoed through the tree as the birds took flight, the Great Horned hot on the heels of the bothersome raven. The owls were less tolerant of the ravens’ antics after this point, and they repeatedly fought back with flared talons when the birds approached. I did my best to snap pictures of these battles: raven chased by owl chased by other ravens. The intensity of the action and the thick cover of the forest made it challenging, but I managed a few shots that capture the chaos.

Too close for comfort

I’m sure that contact was made at some point during the scrap. The ravens’ powerful bills and the fearsome talons of the owls are both impressive weapons, and all combatants gave a wide berth to the “business end” of their opponents. A couple of dive-bombs and tail-chases came close to doing some damage, but the birds did their best to avoid one another’s strikes and none looked worse for wear by the time things finally began to break up. The owls flew further back into the trees, finding some sheltered hiding places out of sight. The ravens gradually settled down and called off the attack, taking off for parts unknown. The humans were left behind, standing in awe of the scene we’d just witnessed. The intensity and action of the encounter, which lasted for about 20 minutes, made for an instant highlight of my wildlife watching career. Two of my favorite species, duking it out together, practically in my backyard. This is an event I would’ve never dreamed of witnessing so close to home, but times change and the planet spins merrily on. Fortunately, nature never ceases to surprise me.

2 Responses to The Clash at Hempstead