Migration is upon us. The past few days have featured several nights with southerly winds, which is a crucial component of this biannual event. Birds returning to North America from the Neotropics rely heavily on favorable weather during their transit to the breeding grounds. Many species migrate primarily at night, fueling up on food during the daylight hours and taking off at dusk. This allows them to fly during the portion of the day with fewer predators, cooler temperatures, and more stable air conditions. In spring, birds use currents blowing from the south to help them home. When the wind stands fair, hordes of winged wanderers ascend to heights where they are visible on weather radar and travel towards their final destinations. Over the years, birders have learned to track wind forecasts and monitor radar to predict when and where migrants will touch down on their incredible journeys. When large numbers of birds settle in one region for the morning, the event is referred to as a fallout.

One of the first fallouts in the NYC area this season occurred on Friday in Central Park. When I checked my email during lunch, I found that a wide variety of species had been reported in the wake of southerly winds the previous night. Friday night began with favorable air flow, but the direction of the wind shifted to blow the other way around midnight. On Saturday, we found that many of the birds had left the area and there were few new arrivals to replace them. In the absence of migrants, the local birds provided plenty of entertainment, but I was still itching for some real spring action. Looking to make the most of my days off, I elected to visit Manhattan on Sunday morning despite the unimpressive wind forecast and migration predictions. I met up with Kaiya, a fellow Cornell graduate, and set off towards the Ramble to see what we could find.

We began our morning stroll began at Columbus Circle, working the western edge of the park on en route to the Lake. Some of the most notable early arrivals from Friday, including reported cuckoo, tanager, and grosbeak, had all moved on. There were still good numbers of birds, even if diversity was far from the variety expected during peak spring migration. Robins, cardinals, and jays were seen throughout the day, and the introduced trio of sparrows, starlings, and pigeons are omnipresent in Manhattan. I gave Kaiya a tour of the major natural areas in Central Park, including the Azalea Pond, the Oven, and Evodia Field.

The Lake as seen from the Oven

There were several guided tours with large groups of casual birders exploring the Ramble when we arrived. Huge groups of observers mean lots of eyes looking out for critters, but they also cause crowded trails and a dash of chaos. Group leaders were also playing recordings to attract birds, which was confusing for nearby wildlife watchers who heard the songs. We kept crossing paths with the tours and other locals, and the combined coverage of the area turned up a number of new spring arrivals. Baltimore Orioles whistled flute-like calls as they lit up the treetops with their bright orange feathers. Kaiya spotted a Black-crowned Night Heron flying up from the shoreline as a boat paddled past. A sleepy raccoon in a tree hollow delighted onlookers as he sprawled out in the sunlight. The main stars of the show, however, were the warblers: Northern Waterthrush, Ovenbird, Northern Parula, Yellow-rumped, Palm, Prairie, and a very drab “mystery bird” that was reported by some birders exploring ahead of us. This individual was refound by the tour groups and eventually IDed as a young female Cape May Warbler who arrived a bit ahead of schedule. We wrapped up our adventure by visiting the special Dinosaurs Among Us exhibit at the American Museum of Natural History. It’s a great addition to the museum with some interesting new science on the relationship between modern birds and their ancestors, so I recommend visiting while it’s on display!

The weathermen called for steady winds from the south all through Sunday night, so I knew I had to be out in the field on Monday morning. I began just after sunrise at Jones Beach, but there were almost no migrants to be seen. A flyover Common Loon, yodeling as it crossed the sky, was the most exciting observation I made. Continuing on to Hempstead Lake, I found half a dozen familiar faces birding the trails. We spent some time catching up as we searched for a reported Louisiana Waterthrush, but we could only find its Northern cousin despite our best efforts. I was starting to grow anxious about seeing a Louie for the year: the more southerly of this pair of atypical warblers migrates through our area early, quickly, and in small numbers. By the time Northerns show up, the Louisianas are mostly gone. Other warblers on the scene included Black-and-white and Black-throated Green, which I had yet to see in New York this year, and my first Yellow Warbler of the season. I checked my email while I chatted with the others and saw a tantalizing subject line: fallout. Central Park was experiencing great numbers and spread of birds compared to what I’d seen on Long Island, and many of the reported species were brand new arrivals. 20 minutes later I was on a train to the city. I regret nothing.

Shining in the sun

Spring is in the air 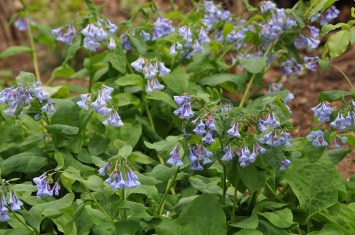 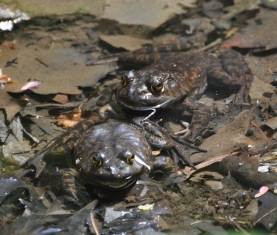 The weather was even more gorgeous than the previous day, and there were far more birds to be seen. The array of species in the park and the numbers of individuals had dramatically increased overnight due to the winds that carried them north. I picked the Ramble with a fine-tooth comb for nearly 5 hours, and I reaped the benefits of thorough searching. Final Central Park reports claimed an excellent total of 21 warbler species throughout the day, and I was fortunate enough to connect with a dozen of them. I was relieved to get good views of Louisiana Waterthrush, and I also tracked down some Blue-winged Warblers and a handsome male Black-throated Blue Warbler. One energetic little Black-and-white nearly landed on my camera lens as he flitted about through the foliage. The best part of this outing was the constant, varied birdsong. Everywhere I went, there were countless birds belting their hearts out, which amped the spring atmosphere up to 11. These bold travelers have come a long way, and when the wind shifts again they will take off to continue their cross-continental marathons. For a pre-May migration day, the totals and experiences in the Park were pretty great. I’m glad that my break from work afforded me the chance to do some quality seasonal birding. Check out the checklist below for a taste of a proper spring nature walk. There are more goodies yet to come! 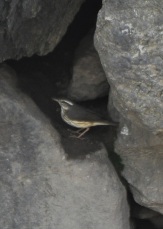 The “Thrush” in the North

Oven at the Oven 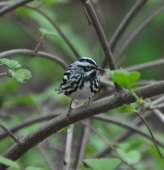 EDIT: You always have to be flexible and expect the unexpected when it comes to nature. When I went to bed on Monday night, the forecast called for thunderstorms throughout the day. I took this as an invitation to sleep in, but I awakened to find my room brightened by unobstructed sunlight. Reading the revised predictions of afternoon rain, I headed out for a quick search of Hempstead Lake and Valley Stream State Parks. A few new arrivals had flown in during the night, and I racked up a decent total of migrants. The most notable observations included multiple Blue-winged Warblers, several other continuing warbler species, and the first Solitary Sandpiper, Common Yellowthroats, and Warbling Vireo of the season. I made it back home ahead of the rain after an unexpectedly lovely morning. Not too shabby. 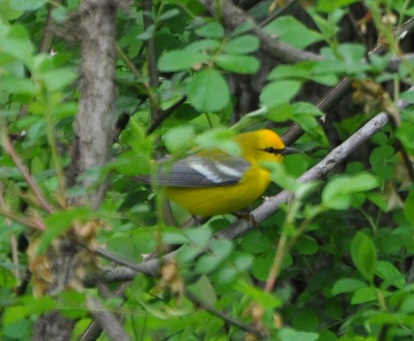 …not easy to get good photos

2 Responses to Let the Games Begin