The annual tradition continues! Most birders I know like to reflect back on the “best birds” of the past 365 days as the new year draws near. Almost all nature blogs post similar Top 10s before the changing of the calendar, and I love a good countdown. In 2016, at the end of my first full year of blog posts, I elected to focus on new birds only to eliminate the complications of choosing highlights from all birds observed. I continued with this decision for 2017, narrowing the pool of possible species from 404 to 34. Let it be known that it’s no easy task choosing the best of the best after such an incredible year of new experiences! After careful consideration, I present the Top 10 lifers of 2017:

Birding is all about the chase! I took part in more twitching and rarity hunting in 2017 than I did in any previous year. Without a prompt from Brendan, I may have never gone after the rare Old World shorebird even though it was only a state away. We had a grand time on our jaunt to Jersey, and we survived the circus of chaos that unfolded on the wildlife driving loop. We even got to see the bird, eventually, at a great distance! I may not have gotten any serviceable photos, but I did make a lot of memories pursuing this hue-shifted Yellowlegs.

Growing up on the coast, I’ve always had a sense of respect and wonder towards the ocean. Seabirds, many of which spend the majority of their lives adrift on the wind and waves, fascinate me. My time working for Project Puffin allowed me to get very well acquainted with Atlantic alcids, but the Dovekie was a conspicuous hole in my life list for years. I finally caught up with these tiny, Porg-like critters thanks to the Paulagics team, and they were absolutely worth the wait.

This April, Florida was the place to be. Prolonged easterly winds ferried a bonanza of Caribbean specialties into the Sunshine State, providing birders with the opportunity to see multiple continent-level rarities at the same site or even in the same tree. By happenstance, my spring break was situated right at the beginning of this spectacle. I arrived too late or too early for some of the most shocking finds, but I still got in on the fun when Brian and I tracked down a stunning male spindalis on one of the last days of my trip. 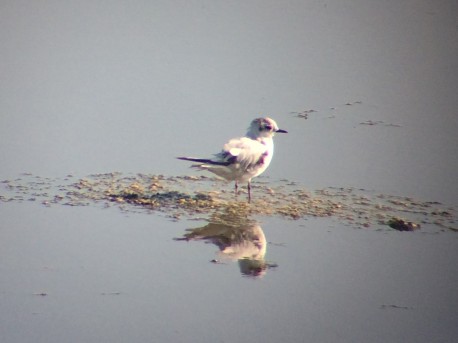 A nemesis rose and fell over the course of 2017. Little Gulls have been giving me the runaround for the better part of a decade, and I experienced several near misses in close succession during the first half of the year. At long last, I managed to track one down and enjoy satisfying, up-close views. Another species will inevitably step up to fill the void someday, but for now I’m happy that I managed to vanquish this tricky opponent. 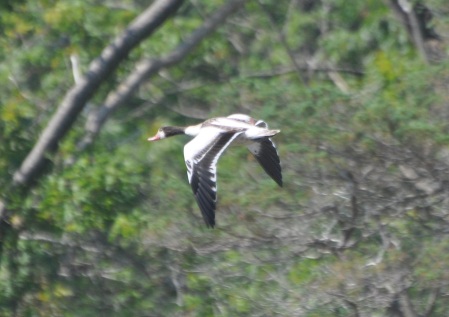 The shelduck has an strange history in North America, setting off lively discussions about potential provenance whenever it appears on our shores. Just last month, the species was added to the ABA checklist as a naturally occurring species, and the young bird that spent several weeks near the New Hampshire/Maine border was a good candidate for a wild migrant. Miriam and I certainly had a blast on our impromptu roadtrip to look for the odd duck, which surprised me with its strange appearance and behavior during our field observations. 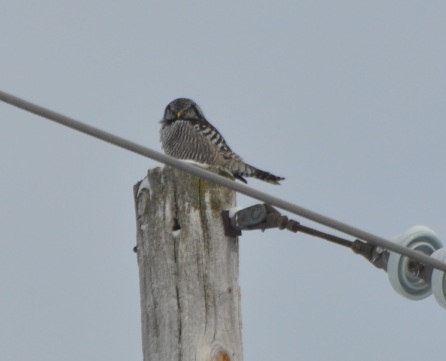 As a lifelong lover of owls, the unusual, unpredictable Hawk Owl ranked highly on the list of my most wanted birds. Friends told me that this northern predator was worth traveling for, and I chased further afield than ever before to track down an individual spending the winter just outside Quebec City. It lived up to my expectations and then some. I also feel justified in my long-distance odyssey thanks to the recent designation of this bird as a “sensitive species” on eBird. It may be more challenging to find these elusive hunters in the future, but I’m happy that they’ll be protected in some capacity moving forward.

The tale of this improbably lost creature was one of the most unexpected events in the birding community this year. Countless people traveled to take part in the celebration of this singular record, even without knowing for sure that it represented a true, wild vagrant. Subsequent sightings of the same individual in Connecticut and Massachusetts add delightful wrinkles to the already compelling story. I have thought of this bird often over the past few months, wondering where the journey began and where it has led since. Only time will tell if the records committees officially accept the oriole as countable (Narrator: They did!), but it doesn’t really matter as much as the encounter did. This was an unforgettable bird!

The January Paulagic trip was a fantastic offshore outing, but the August expedition to the continental shelf blew it out of the water. We traveled more than 140 miles from the coast, and we found a surfeit of seabirds that associate with warm, deep regions of the ocean. The most desirable of these was the White-faced Storm-Petrel, one of the grand prizes of pelagic birding in North America. I’ve never seen anything quite like this bouncing world traveler, and even our brief encounter was enough to leave me floored. Maybe we’ll cross paths again one day, if I’m lucky. 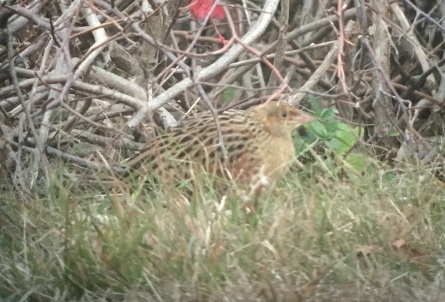 This is undoubtedly one of the top “Top Birds” of the year for everyone who was fortunate enough to see it. Indeed, I’ve spoken to many birders who rank this as perhaps the greatest, most remarkable sighting of their life. This species has only been recorded in North America a handful of times since the turn of the 20th century, and there had never before been a chaseable record. Only one major North American field guide contains any information about the species, that’s how far “off the radar” it is. Beyond that, the Corn Crake is striking in appearance and proved endlessly entertaining to watch. I only regret that the choice in location that made this individual so readily accessible and visible also put it in position for its early demise. Hopefully the isotope analysis which has been arranged can tell us a bit more about this wayward wanderer. Its specimen shall remain hereafter at the American Museum of Natural History, and its memory shall remain in our hearts.

I wasn’t certain which of my Top 2 birds was going to take the highest honors before typing this post. It is almost impossible to rank either above the other. Both birds are stunningly rare and unique even among their closest relatives, and they both have pretty snazzy plumage as well. The “drop everything” mayhem of twitching the Corn Crake close to home contrasts with the long-range, carefully planned adventure in search of the Ross’s Gull, and both events represent some of my favorite aspects of birding. In the end, however, there was a little something extra magical about Rhodostethia rosea.  The crake may have been a bigger surprise that represents a more enviable feather in my cap, but I have spent much of my life wondering if, how, and when I would ever see a Ross’s Gull. It is the quintessential rare bird, a nearly legendary creature that seasoned explorers and aspirant newbies alike speak of with a twinkle in their eyes. The saga surrounding this gift from the Arctic was something I’ll never forget. I was shocked when I first heard about the gull’s presence. I eagerly followed the correspondence with the homeowner who graciously opened his house for the stakeout. The drive up was full of excitement, and I joined a gathering of fellow birders on site only to find the bird missing. I departed disappointed, receiving a summons with positive news when I was over an hour away. When I finally arrived to see those gorgeous, graceful wings hanging on the wind above a frozen Adirondack lake, I was absolutely transfixed. The Ross’s Gull is globally sought-after, aesthetically entrancing, and ecologically fascinating. Sharing this particular episode with good friends and claiming victory after a near miss only enhanced the overall experience. Birding just doesn’t get much better than that.