Migrants on the Move

Despite the increased responsibilities and reduced free time resulting from a new academic year, I’ve managed to make good use of my breaks from lesson planning in the initial half of September. When I checked the weather projections at the end of my first week back, I saw that the winds were favorable for some serious migration. The latest BirdCast report predicted “heavy and locally very heavy” flights of birds on Friday and Saturday nights. I made sure that my work for the next few days was squared away so I could get out into the field bright and early.

The overnight base reflectivity radar revealed huge numbers of birds taking off all over the continent, and one of the hotspots was on track to land on Long Island in the morning. When I awoke before sunrise, I saw that the latest images showed a concentration of birds descending into Suffolk county. I chose to start my day at Robert Moses in the hopes of intercepting the migrants during their dawn flight down the coast. Fire Island’s usual suspects came out to greet me once I arrived: loafing parking lot gulls, groups of grazing deer, and a young Red Fox that darted across my path, pausing briefly to look back from the safety of cover before continuing deeper into the brush.

Race to the Tropics 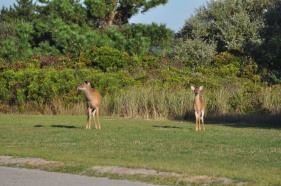 As expected, the numbers and diversity of birds moving west down the shoreline were fantastic. Warblers continually streamed past throughout the morning, with some individuals barely missing my head as they dove into the shrubs behind me. I tallied several hundred individuals from my vantage point, no doubt a small sample of the event’s overall magnitude. The majority of the birds I was able to identify were American Redstarts and Black-and-white Warblers, with plenty of Northern Waterthrushes, Magnolia Warblers, and Common Yellowthroats rounding out the ranks. I recorded small numbers of 6 additional species, but I have no doubts that there were many more among the masses. Non-warblers included an abundance of Cedar Waxwings, swarms of swallows, a handful of vireos and orioles, and regular appearances by Bobolinks. Merlins and kestrels patrolled the edge of the vegetation, keeping the smaller birds on alert. The highlights of my vigil were a quartet of local rarities: Red-headed Woodpecker, Dickcissel, Lark Sparrow, and Western Kingbird. All of these species are scarce but expected vagrants in our area during fall migration, and large flights offer the best odds of finding them. Encountering any of these visitors would be a high point of a day’s birding. Finding all 4 in the space of a few hours was a delight.

Wind direction and speed remained favorable well beyond nightfall, and Sunday morning found me back on the hunt at Jones Beach. There clearly weren’t as many birds passing overhead in transit, but the vegetation came to life as the sunlight began to warm the area. I found an array of warblers fluttering through the hedgerow and the foliage along the edge of the fisherman’s road, along with a Scarlet Tanager and a mystery flycatcher. 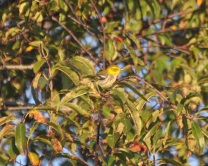 Is it easy being Black-throated Green?

Empidonax flycatchers are notoriously difficult to identify by appearance alone. Autumnal wanderings cause many species to overlap in range, and they are not nearly as noisy as the hormonal spring migrants and breeders. Photo analysis revealed that my nondescript bird was either an Alder or a Willow Flycatcher, but without hearing any vocalizations it is all but impossible to separate these former conspecifics in the field. However, there was no mistaking the identity of a Western Kingbird that sallied out in front of me to nab a passing insect.

Now you see me… 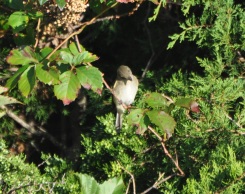 A secret of subtlety

It is a mystery

Shortly after the kingbird disappeared, I met up with Brendan and his friend Jacob, a Colorado native and current Chicago resident who was visiting NYC. We scanned through the hordes of shorebirds assembled on the sandbar and set about exploring the median, our guest’s state list growing by the minute. We were treated to up close and personal encounters with several Cape May Warblers, a fantastic eye-level photo opp for a species that typically forages in the treetops. Even in their duller autumn garb, these birds are probably my favorite warblers. A dapper male discovered on a high school retreat was the first uncommon member of the parulid family that I found and IDed on my own, so I’ve always held a soft spot for Setophaga tigrina. I have been fortunate enough to hear them singing on their boreal forest breeding grounds, watch them sip nectar at flowering trees in the Caribbean, and observe their passage at unforgettable migration hotspots everywhere in between. The countless fond memories that become associated with the birds we encounter are, in my opinion, the most rewarding aspect of birding. 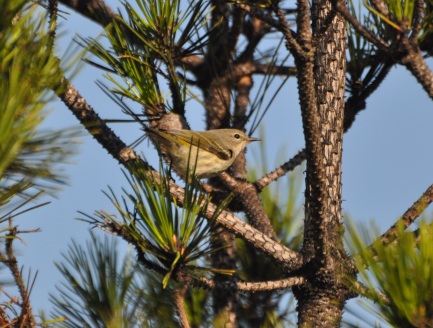 She sticks the landing! 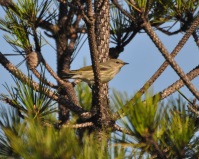 Good luck on your journey

Keeping an eye on the skies is critical during fall migration, and we were lucky enough to spot a trio of Common Nighthawks and a Caspian Tern. We checked a couple of the state park’s parking lots on our way out, turning up a resting Lesser Black-backed Gull, some lingering Boat-tailed Grackles, and a plunge-diving flock of Royal Terns. We briefly stopped by Hempstead Lake, but found the forested trails mostly quiet. Jacob, Brendan, and I parted ways, content with the successes of our searching. 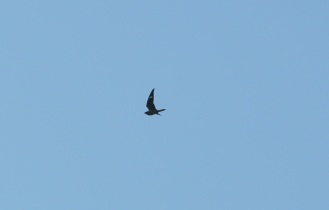 Even though the conditions for night flights were far less promising on Monday, I still had bird-based plans in Manhattan. The annual Tribute in Light projected at the World Trade Center is more than a touching and powerful homage to the tragedy that struck on this site. The towering beacons illuminate the night sky, drawing in migrating birds from miles around. Photopollution can confound the travels of winged wanderers under the best of circumstances, and these massive, radiant pillars have proven to be a nigh irresistible trap. Those responsible for operating the lights are sensitive to the potential dangers the beams present to wildlife, and NYC Audubon helps to monitor the luminous columns for ensnared migrants. Many of my friends have helped to survey the Tribute over the years, recording numbers and diversity for hours on end. When enough birds are detected circling the area, volunteers notify the staff and the lights are temporarily shut off to allow the weary travelers to continue on. Lots of folks come together to make this event run smoothly, and as a New Yorker and a wildlife lover I am grateful for that.

I have never gotten a good look at the Tribute in Light, and the significance of the display along with the spectacle of nocturnal migrants convinced me to make a trip. I met up with Jacob and we spent about an hour watching from a few blocks away. At such a distance, the birds looked more like insects or twinkling stars. Species identification was impossible, but we could still make out hundreds of individuals swirling in and out of view, visible all the way to the top of the columns. The solemn gravity of the situation, combined with the impressive numbers of equally impressive creatures, made for an awe-inspiring sight. To me, the scene served as a symbol of tenacity and hope. Migrating birds and communities of humans both face our fair share of obstacles, though the natures of those difficulties are worlds apart. Every living creature has its own tale of challenges and successes, persevering despite the struggles. Through hardship and adversity, time and time again, life finds a way. 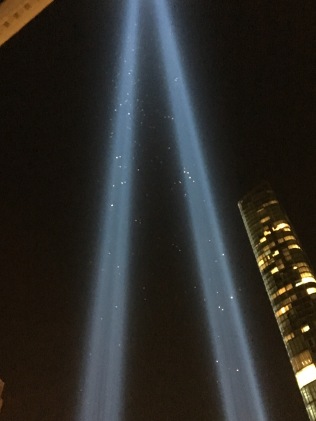 1 Response to Migrants on the Move