After our morning enjoying the wildlife and water features of Yellowstone, we turned our sights south and headed towards Grand Teton National Park. Although the older, larger park typically gets more recognition, Teton is still an absolutely wonderful place to visit. As part of the Greater Yellowstone Ecosystem, it is home to many of the same animals and plants you can find to the north. In addition, the vistas along the Snake River and various lake shores are often even more stunning than the landscapes in Yellowstone. Hooking east from the Jackson Lake Junction, we drove along the Oxbow Bend and exited the park. We set up camp at Fireside RV Park a short distance from the gates at Moran Junction, and this became our base of operations for the next few days. It was a pretty nice place to stay, thanks to both the proximity to the park and the wildlife inhabiting the area. Miriam and I spotted a Long-tailed Weasel, and groups of swallows, bluebirds, blackbirds, and siskins were seen foraging nearby. There was even a family of Trumpeter Swans down the road that we passed on our way in and out each day.

My, oh my, what a wonderful day

On vacation away from the pines 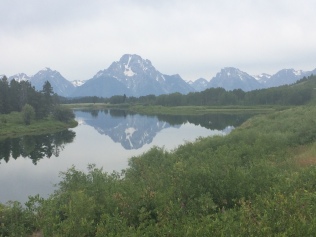 For our first evening, we took a slow ride through the Grand Teton driving loop. Of all the charismatic large mammals inhabiting the region, the Moose was our only glaring miss so far. Knowing that these giant deer are most active at dawn and dusk, we scanned thoroughly as we rolled past willows and forests along the riverbanks. Although our twilight drive provided us with some lovely photo opps and no shortage of wildlife encounters, we failed to locate our primary target before turning in for the night. 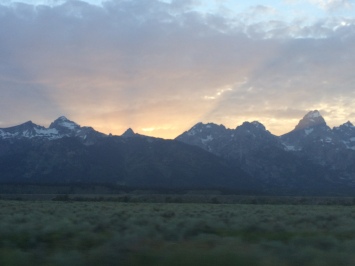 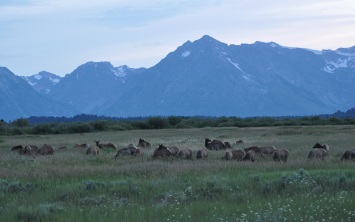 We slept in a bit the following day, but we still made a morning search run before digging into breakfast. Once again, no Moose. Mom and Dad decided that we should head into Jackson for the day, so we began a leisurely journey south once again. Large crowds parked on the roadside at Jackson Lake Junction gave us pause, and we were treated to distant views of a mother Grizzly standing up to survey the area. A stop at the Snake River Overlook proved to be worthwhile, turning up Townsend’s Solitaires, Ruby-crowned Kinglets, “Audubon’s” Warblers, and more, most of them tending to newly-fledged young. I also spotted a mouse hiding under the wheels of a vehicle that was about to pull out, so I alerted the drivers and directed them away from the tiny rodent. It seemed intent on rushing towards the nearest tires to hide, so hopefully my efforts to protect it weren’t just prolonging the inevitable. 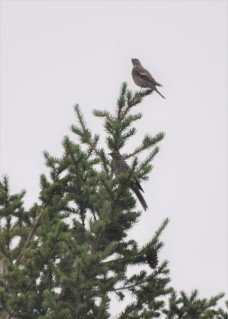 We continued along towards Antelope Flats, taking a dirt road south from Mormon Row in search of Greater Sage-Grouse and other sagebrush specialties. Miriam checked off Western Meadowlark and picked out a Sage Thrasher, which gave better views than my lifer from the Lamar Valley a few days ago. At midday we reached the Gros Ventre River, the boundary between Grand Teton National Park and the National Elk Refuge. Pausing at a roadside pullover, Dad lifted his binoculars and scanned the far river bank. 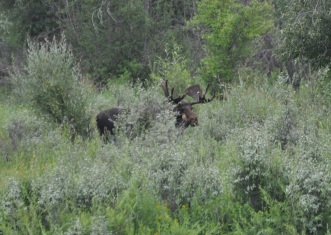 There’s something special about finding your own wildlife to watch. Critter-based traffic jams are very common in both Yellowstone and Grand Teton, so Dad was especially pleased to get credit for our surprise Moose. His discovery created a jam of its own, with over a dozen passersby pulling over to watch the huge bull browsing on the willows. I’ve seen my share of Alces alces in my day, but this was easily the biggest, burliest beast I’ve been lucky enough to meet. It’s been far too many years since I’ve actually seen a Moose despite summers working in Alaska and Maine, even though I did hear an individual crashing through the woods outside the Project Puffin headquarters in 2014. This was a reintroduction that was long overdue, and Miriam was especially happy to make his acquaintance. We did a little bit of birding on our side of the river before loading up and resuming our journey. 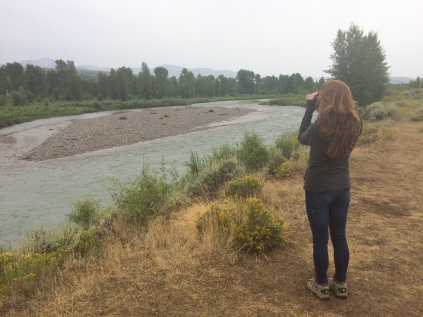 Ready to offer some sage advice 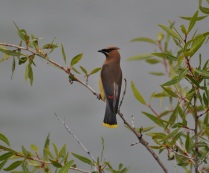 It started to rain as we approached the National Museum of Wildlife Art, which conveniently offered some indoor entertainment when we needed it most. Dad pointed out hummingbird feeders near the entrance, and I was able to find a smaller, shorter-tailed female among several Broad-tailed Hummingbirds bellying up to the bar. This was a long-awaited lifer that a few of my family members had over me: the Calliope Hummingbird. Leaving the hummers and the watchful eyes of the trees, we headed inside to check out the artwork. 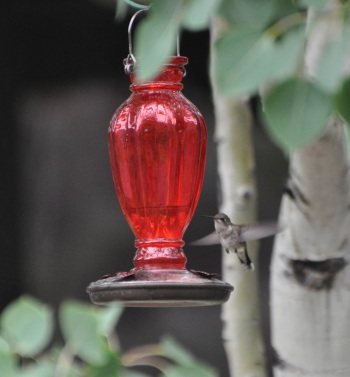 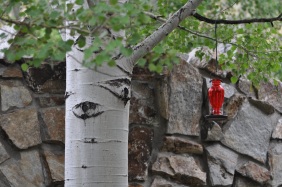 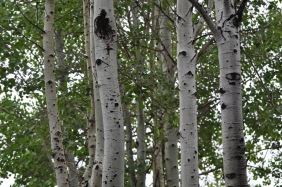 The museum was really quite impressive. In addition to pieces by local artists and older paintings, they had an exhibition on the diversity of hummingbirds as well as a wing dedicated to Joel Sartore’s “photo ark” project. I also enjoyed the statues outside, which included extinct North American birds alongside the quintessential megafauna of the Rocky Mountains. It was definitely worth a visit, and by the time we were ready to leave the rain was starting to let up.

A moment of silence 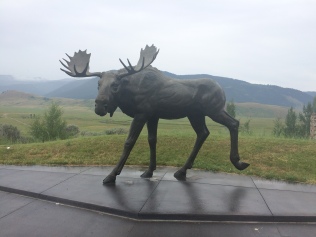 Down in Jackson, Miriam and I split off from my folks for a little while. Although she was enduring pain brought on by overactive wisdom teeth, she was still eager to explore the area for wildlife. As we drove into town, she’d spotted a Yellow-headed Blackbird along the road. Hoping for a closer look, she led me down the street towards the Flat Creek Marsh. We passed a couple of Black-billed Magpies on our way out of town, though most of them were raggedy, short-tailed juveniles that didn’t look quite as svelte as their dapper parents. 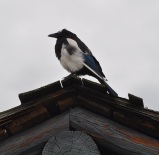 A family of Common Ravens was roving around on the lawn outside the visitor center, putting on quite a show. One of the parents stopped by to cough up a meal, and the youngsters quickly began squabbling over the chunks of meat provided by the adult. Juvenile ravens usually lack the wary tendencies of full-grown birds, but their minds are just as sharp and curious. They strolled right over to Miriam and me, regarding us with bright eyes. When I offered my best raven impression as a greeting, they froze in place at the croaking sound. I swear I could hear the gears spinning in their heads as they tried to figure out what we were up to. “I can see why you like these guys so much,” Miriam admitted. “They’re pretty cool.”

Despite its proximity to both the town and the busy highway, Flat Creek Marsh turned out to be surprisingly lively. We heard a few Soras vocalizing loudly from the reeds at the edge of the lawn, and a snipe that suddenly flushed from underfoot almost gave Miriam a heart attack. A variety of ducks were floating on the pools, and Marsh Wrens bounced from stem to stem. We finally managed to locate some Yellow-heads, listening to their bizarre cries echoing across the marshy landscape.

Hey, what’s that black bird with the yellow head

We reunited with my parents in town to do some shopping, drinking, and eating. We then returned to Antelope Flats to continue our search for sage-grouse, but unfortunately we came up short yet again. I was happy to find my first Brewer’s Sparrows, though, and we appreciated close looks at Pronghorn, Mule Deer, and a Long-tailed Weasel which was slinking through a grate at the entrance to a ranch. 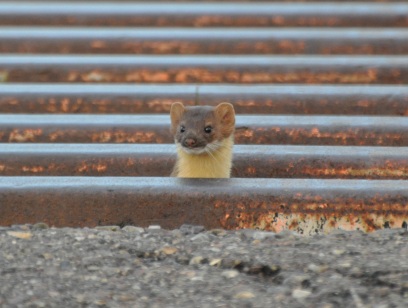 We watched the sun go down behind the Tetons one last time, drinking in the beauty of the sagebrush plains set against the stark peaks in the distance. Simply gorgeous. 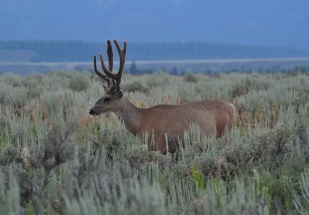 We had to drive up through Yellowstone one last time to drop off the rental car in Cody, so we were treated to another day driving around in search of wildlife. Waterbirds were the highlights along the shores of Yellowstone Lake, including a confiding White Pelican, floating flocks of Barrow’s Goldeneyes, and unexpected sightings of Western Grebe and Franklin’s Gull. We waved goodbye to the bison, the geysers, and the wolf watchers as we made our way north to Gardiner, leaving Yellowstone behind…for now.

It’s always difficult to board the plane and leave for home at the end of a successful adventure. Miriam and I treated ourselves to one last hike the morning before we returned to the Bozeman airport, and it was absolutely worth it. We finally got a look at her number one target bird for the trip, the Lazuli Bunting, after hearing one singing outside our window the previous evening. In addition to picking up a few other species, we were treated to breathtaking vantage points from the Joe Brown Trail up Dome Mountain. It was a delightful end to a spectacular vacation.

Farewell for now, Yellowstone! My track record has proven that I can’t stay away for very long, and I think Miriam’s stellar first visit may have established the same need to come back again. I’ll jump at any excuse to experience the magic of America’s first national park. This visit, for what it’s worth, resulted in some new favorite Yellowstone memories! Until next time… 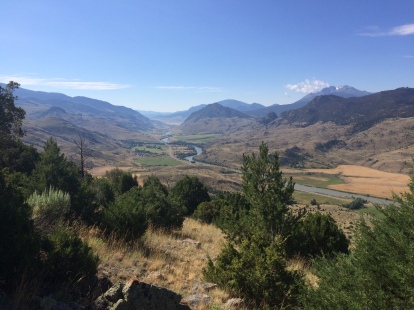