It’s been a busy couple of weeks here on Long Island. The post-migration season this year has seen a number of unexpected discoveries as non-breeders and off-course travelers wander up and down the East Coast. Most of the noteworthy action has been centered along the shoreline, and a majority of the highlights have been out of place waterbirds. Monday was the last day of normal classes until the end of the month, and I got off work a little earlier than expected. I decided to make a trip down to the barrier beaches in the hopes of following up on some reported rarities. My first stop was Jones Beach, where the Black-necked Stilts from a few weeks back had been sighted once again. I was fortunate enough to find the slender shorebirds quite quickly, though they remained distant and poorly lit in the fading light of day. After happily adding this species to my New York State list, I turned back towards the car, noting a noisy Royal Tern that flew west over the swale.

I continued on to Nickerson Beach, where rare birds continued to surprise observers at the tern colony. Apart from continuing Roseates and Royals, a new Arctic, and a few Black Terns that continued to elude me, several lucky birders had been treated to glimpses of a young Little Gull, my Nemesis Bird. It had been seen only twice, nearly a week apart, for only a few minutes at a time. The most recent encounter occurred while I was en route to Edgewood for the Whip-poor-will show. I knew that hoping for repeat performance was a bit of a pipe dream, but I was willing to put in the time for an evening vigil on the beach. Mike Z, Rob P, and several other familiar birders were on site to keep me company, and we had a great time enjoying the local birds as the sun slowly sank towards the horizon line. 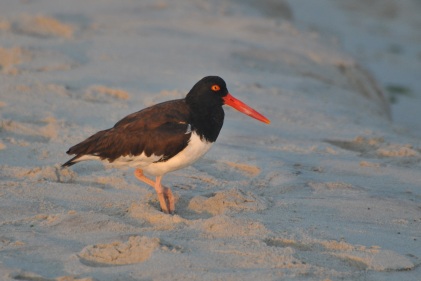 Oystercatcher in the Rye 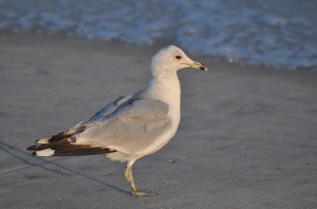 Rob, the original finder, told me that the Little Gull had apparently been harassed fiercely by the resident breeders both times that it visited the beachfront nesting grounds. Anyone who’s ever been around nesting Common Terns can tell you how intense they are about defending the perimeter of their territory, including the airspace above it. “Relentless” is just about the most polite term you can apply to these plucky little seabirds when describing their anti-intruder assaults. The grating, staccato calls that they utter while diving at interlopers sound like bursts from a machine gun, and they have a nasty habit of letting loose bombs of excrement with startling precision. Most of their swooping attacks pull up just short of contact, but the brave birds will not hesitate to dole out pecks on the noggin for invaders who push their luck. I’ve lost a few drops of blood to this species during nesting surveys on Eastern Egg Rock, with some individuals even perching on my head to really drive their point home. The Nickerson birds are just as aggressive with any and all perceived threats. For several hours, we watched as Royal Terns, Ospreys, and American Oystercatchers were pursued by angry Common Terns. 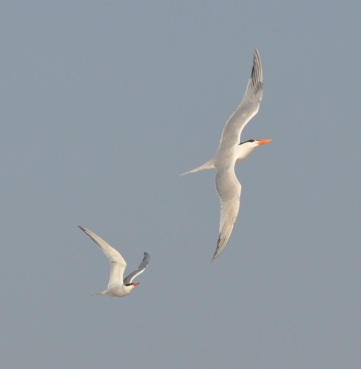 How’s that for the royal treatment? 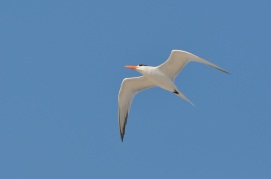 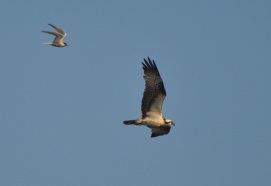 As the sun slipped out of view, the birds began to settle in for the night. The Little Gull was a no-show, so we were getting ready to pack it up and head out. Suddenly, the flocks launched back into the air, twisting and weaving at low altitude and flying towards the water. The Project Puffin field biologists called this phenomenon “the dread:” a coordinated display that’s seemingly intended to disorient predators and make it difficult to isolate a singular target. We searched for the source of the commotion and found an adult Peregrine Falcon clutching a tern in its talons. Birds repeatedly dove at the raptor, and surprisingly it dropped its catch! I lost track of the would-be-prey in the swirling storm of seabirds, but the falcon wasn’t going home hungry. The Common Terns continued their chase tactics, attempting to drive the Peregrine away. On its third pass through the colony, it managed to snag a kill and hold onto it. We watched the bird fly east with its supper, disappearing into the dark as calm slowly returned to the beach. What an amazing end to the day! 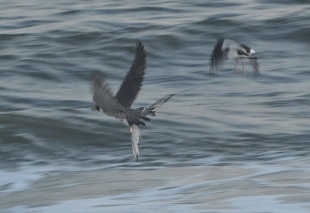 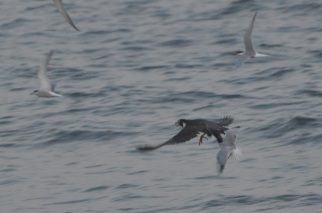 This is falcon crazy!

Miriam had marked the stilts on her most wanted list and was already pretty bummed about missing them the first time, so she was eager to take a second swing at them when she wasn’t busy with work. We returned to the swale again on Wednesday, getting much better looks at the long-legged vagrants. While we were admiring their fancy, monochrome plumage, we spotted a White-rumped Sandpiper foraging nearby. I’d seen a few of these birds from afar on Monday, but it was nice to see one up close for the first time this year. For Miriam, it was yet another lifer. Vicious mosquitoes kept us from lingering too long at the site, but we went home satisfied with our encounter.

The weather was a bit iffy on Saturday, but we still jumped at the opportunity to get out and do some exploring. I introduced Miriam to the nesting Purple Martins at the marina adjacent to the Lido Beach Passive Nature Area. We also spotted several families of Canada Geese, including an individual marked with a neck collar. I reported the bird to the relevant authorities with the necessary details. It’s always cool to see a banded individual in the wild!

Watch out for that PUMA!

We walked the trails that led out into the marsh, taking note of a robin carrying food and a fledgling Red-winged Blackbird along the way. There were plenty of Willets hanging out at close range, and egrets and night-herons could be seen foraging further out in the grassy expanse. The foggy conditions made photography a bit difficult, but sometimes its enough just to see the birds well.

After scanning the saltmarshes from the observation deck, we started back towards the parking lot. Ospreys were seen making use of the man-made structures supplied for them, resting on perches and nesting platforms as they surveyed the scene. Our final surprise of the morning was a muskrat foraging in the grass not far from our car. It quickly scurried into the brush as we approached, showing off its flattened tail as it bounced away to safety. I brought Miriam home and headed back to Lynbrook to get ready for the day’s obligations.

I was at a family barbecue later that afternoon, beginning to plan my exit when I got a exciting report. A Brown Booby had been discovered at Nickerson Beach by Joshua Malbin, Shai, and Pat L, continuing the trend of surprising seabirds at this magic colony. I called up Miriam, inadvertently waking her from a nap, to deliver the news. When she heard the latest update from the field, she sprang awake and began getting her gear together. She was already eagerly waiting outside the house by the time I reached her, and we rushed down to the coast yet again. Upon arrival, we found that the fog had thickened and now shrouded the entirety of the beach. Misinterpreting the email in my haste, I led the charge down to the eastern tern colony, finding no birders and no booby. I sent out a text update, and the mist began to retreat slightly. I was surprised when it revealed a huge congregation in the distance, optics trained on the western colony. My phone started to blow up with messages, calls, and voicemails as the good birders of Long Island reached out to correct my mistake. Miriam and I hastened our pace, arriving to find the bird still present on her perch atop a Piping Plover exclosure.

Booby sighting at the beach

A long way from the Caribbean 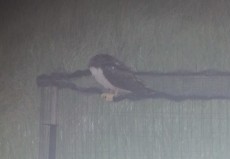 She’s having a crappy day

This was not my first booby in New York, but the bird was undoubtedly a long way from her home in the Caribbean. Brown Boobies have a propensity to wander, though the voyages are not always easy for them. This adult female had her head tucked behind a wing, and the ever-obnoxious Common Terns were divebombing her repeatedly as she tried to catch some rest. The feathers of her upperparts had already been fouled by their excretory assault…hardly a warm welcome for this exhausted, lost traveler. We watched the bird for some times and exchanged congratulations, hugs, and laughs with the other assembled birders. Miriam and I did a stint in the car when the rain started to pick up, but we walked back down to the nesting grounds as the sun was about to set. We spied the first baby plovers of the year, as well as plenty of young oystercatchers. An adult Black Tern flew overhead, calling loudly before settling in with the loafing flock for a bit. As we prepared to leave the beach, I passed my binoculars to Miriam and suggested that perhaps the booby would lift her head “for the last look.” Against all odds, she did! We got to see the her distinctive bare face and pointed bill as she scanned her surroundings one last time for the day. When she went back to sleep, we went back to the vehicle.

The morning brought unfortunate, if unsurprising, news. After taking a dawn flight along the shoreline, the female Brown Booby collapsed on her perch early in the day and expired. Her remains were collected as a specimen for the Cornell Lab of Ornithology, and it may be possible to determine if it was illness, starvation, or exhaustion that brought her tale to this sad end. Obviously death is a fact of life, and it is often difficult for these shockingly lost rarities to survive in strange lands. All the same, I’ll raise a glass to this particular bird, whose improbable path crossed mine and linked the narratives of our lives for this short period of time. I think many of the birders who got to meet her will feel similarly: impressed by her journey, saddened by her passing, relieved that her final resting place will be an institution of science, and honored to have witnessed her alive in nature during the final chapter of her story.