Adventures at the End

I love when plans for an unexpected journey come together on the spur of a moment. With beautiful weather forecast for Saturday, Miriam suggested that we take her Jeep out to Montauk and do some exploration. Of the friends asked on short notice, only Josh was able to join us, but we ended up taking Gracie, Miriam’s pit bull, along for the ride. The drive out was fantastic, with the top down the breeze and the bright sun felt divine. We stopped for lunch at Lunch, also known as the Lobster Roll, in Napeague before continuing onward to Shadmoor State Park. This site is best known for its massive World War II-era bunkers, looming imposingly atop towering bluffs that look out over the sea. These sandy structures are also home to colonies of Bank Swallows that have excavated nests in the sheer faces of the cliffs. We watched the swallows as they wheeled about, swooping low over the path and cruising along the land’s edge.

We stared down from our lofty perch at the waves crashing 100 feet below. There were lots of folks walking along the beach, and several surfers were hanging around in the water. I was surprised to see a large flock of nearly 200 Black Scoters foraging among the breakers. These sea ducks, along with their close cousins, are superabundant off the coast of Montauk during the winter. Although small numbers often linger, this kind of congregation is a rare sight in summer.

Scoters in the surf

When we finished our hike at Shadmoor, we turned back west and headed for Hither Hills State Park. We took one of the access roads through the woods to get to the beach, bouncing over roots and ruts along the way. Josh remarked that riding in the Jeep over rough terrain with dense greenery all around us reminded him of Jurassic Park. Not a minute later, a dinosaurian silhouette dashed across the road in front of us. Had someone left the raptor paddock open? We slowed to a crawl and crept up on the bush where the shadow had disappeared, coming face to face with a female Wild Turkey. The beefy bird slowly strode off into the forest, providing great views as she strutted through the foliage. We encountered a Red Fox a bit further down the path, and there were plenty of smaller birds singing near the lot at the terminus of the road. 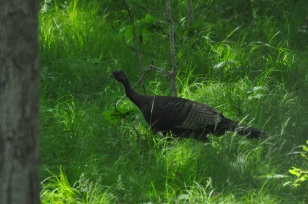 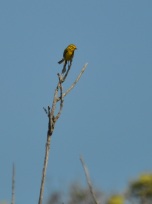 We spent nearly two hours lounging on the shores of Long Island Sound, soaking up sun and basking in the breeze. While we were relaxing on the sand, we checked ourselves for unwanted passengers. Miriam and I found a few ticks crawling on our clothes, but Josh and Gracie both had multiple individuals latched onto their bodies. Once the bloodthirsty arachnids were removed, we were able to fully enjoy the lazy afternoon by the water. A showy male mockingbird and a few performing Prairie Warblers caused us to pause at the lot before we got back in the vehicle. After snapping a few pictures, we drove back out the way we came.

This is my perch now

You’re mocking me, aren’t you?

We arrived at Big Reed Pond as the shadows were beginning to grow longer. The exhaustion of a full day in the sunlight was starting to get to me, but I knew that this was a great area to explore for wildlife. I got a bit turned around on the trails since we didn’t enter the way I usually come in during the Christmas Bird Count. Eventually, however, we came around a bend to find the swaying reeds that encircle the pond. I was pretty spaced out, enjoying the golden glow of evening and listening intently to birdsong as we walked along.

The peace was suddenly broken by a sharp shriek and a burst of movement as a something went scrambling from the side of the trail into the brush. “What the hell is that? A chicken?” asked Josh. “Do they have chickens out here? Look at that thing!” The small fowl had quickly scurried into thick cover, but it remained barely visible as it paced back and forth in the undergrowth, calling loudly. I strained to make out the details, confirming that it had rusty plumage, black-and-white stripes on the flanks, a short, cocked tail, and a long, reddish bill. I was hoping to come across some Virginia Rails at this location, but I was not expecting to stumble upon one at close range like this. The bird continued walking around and vocalizing, staying in the same general area. I suspect that it had a nest or young close by, so I led the others along and left it in peace. We found a pair of Tree Swallows nesting at a duck blind further down the trail, reveling in amazing views in the late afternoon light. We heard and saw the rail yet again, still skulking beyond the edge of the path, as we passed by en route to the Jeep. 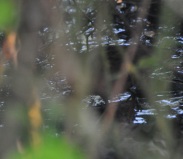 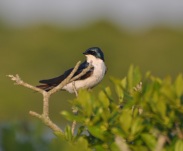 It’s only fitting to spend the end of the day at the End of the Island. After a quick dinner, we returned to the Point to watch the sun go down. The colorful skies over the Sound did not disappoint. It was a great final act for our adventure, and we listened to the final performances of the nearby songbirds as the day came to a close. Josh was kind enough to take the wheel, and I for one was slipping in and out of consciousness the whole way back west. 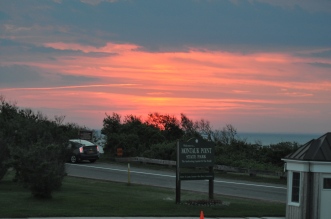 On the journey home, I convinced the crew to stop in Quogue and listen for singing nightjars. Whip-poor-wills and Chuck-will’s-widows are known to inhabit the wooded areas in this neighborhood, and it is possible to hear both species from the same stretch of road if you’re lucky. Unfortunately, I had no such luck. Perhaps we had arrived too late after sunset, maybe the birds were busy foraging or singing deeper in the forest. At any rate, it was a swing and a miss. It was hard to complain about this strikeout at the end of a fun, full day, but I still wanted to settle the score.

After a sweltering, uneventful Sunday, I drove out to Edgewood Oak Brush Plains Preserve just before dusk. I had only visited this park once before, but I had received intel that it was a prime spot for listen for Whip-poor-wills. I’d already seen and heard Chucks earlier in the year, and I really wasn’t looking to drive all the way back to Quogue just to take a chance at hearing them simultaneously again. The Whips would have to do, assuming I was lucky enough to find them. I maintained a brisk pace as I walked out to the spot where I’d seen the Red Crossbills back in March. A passing biker stopped to chat with me as I waited for the sun to set, sharing fun facts and short stories about the property and his experiences over the years. He didn’t continue along until the sky had begun to darken, but after he said farewell I noted a Whip-poor-will singing close by. 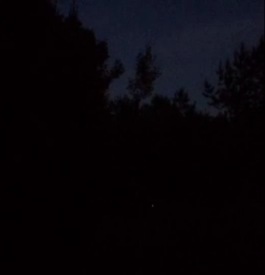 Music of the Night

The Eastern Whip-poor-will is named for its iconic song, a rolling, repetitive chant that is frequently heard on summer evenings in the woods. Their whistled cries have featured prominently in literature and music, variously described as melancholy, manic, eerie, irritating, or soothing. It’s hard to believe that all these folks are listening to the same bird, but there’s no denying that it’s an evocative sound. Personally, I love the lilting lullaby delivered by Antrostomus vociferus. I tallied half a dozen individuals in the preserve that night, singing with gusto and pausing only to nab flying insects or switch perches. I stood among the shadowed trees, enjoying the chorus of Whip-poor-wills and watching fireflies twinkle across the landscape. The air was still, the sky was clear, and the temperature was ideal. In short, it was a perfect night to kick off the summer season.

1 Response to Adventures at the End