The Joys of June

We’re approaching the halfway point of 2017, which means that spring migration is behind us and the end of the school year is drawing near. In a few short weeks, I’ll be finished with teaching for the season. If all goes well, I’ll be done with my grad school coursework and strolling away with a master’s in education. There’s a lot of work to do before summer break can officially begin, but I’ve still found free time to get outdoors and explore.

June is a great time to get up close and personal with birds that breed locally. I brought Miriam to Jamaica Bay over the weekend in the hopes of seeing the resident Barn Owl family at Big John’s Pond. Unfortunately, the raptors were not visible when we arrived, most likely due to the chilly, wet conditions early in the morning. There were a few egrets and night-herons around to keep us company, and we saw and heard plenty of songbirds flitting through the foliage.

I have the high ground!

We continued onward to the East Pond, and I picked out an adult Bald Eagle perched on North Island at the far end of the water feature. Even though it was essentially a white dot on top of a dark dot at that distance, we were still happy to spot one of these majestic predators. As we walked back the way we came, I heard a strange sound coming from the phragmites near the boardwalk to Big John’s. It was a muffled, low “coocoocoo,” a bit like someone knocking on a hollow piece of wood. I immediately froze in place, and Miriam asked me what was making the mysterious noise. Knowing that there were only two possibilities and being rather confident which it was due to location and overall quality, I retreated a short distance down the trail and quietly played 2 birdsongs into my ear to check my memory. Nope, definitely not a sneaky Black-billed Cuckoo, hiding somewhere near the reeds. The voice didn’t sound high or whistly enough. The recordings confirmed my initial hunch: the source of the cooing was a male Least Bittern.

This was an especially exciting find. I’m a huge fan of these half pint herons, and I’d never before encountered one in New York. This was also my 300th bird for the year, joining Dovekie and Cape May Warbler as my 2017 century markers. I couldn’t see the tiny bird in the dense vegetation, but Miriam managed to get a quiet recording of its soft singing. This video shows a clearer view of what was happening deep in the phrag while we listened and strained to get a visual. We eventually moved on, leaving the bittern in peace and reporting its presence to the listserv with a reminder not to harass this rare potential breeder. Our final stop for Saturday morning was Plumb Beach, where we missed Nelson’s Sparrows but heard plenty of Clapper Rails. I even briefly saw one strutting across a mudflat before ducking into cover.

Sunday was a lazy day, so I slept in and took the time to relax. I headed down to Cow Meadow Park in the late afternoon, where I found the continuing Cattle Egret but no sign of our elusive White-faced Ibis. There was a lot of activity around the pond even as light rain began to fall. Canada Geese and Mallards already have new babies running around, and there were multiple displaying Boat-tailed Grackles and Red-winged Blackbirds present. 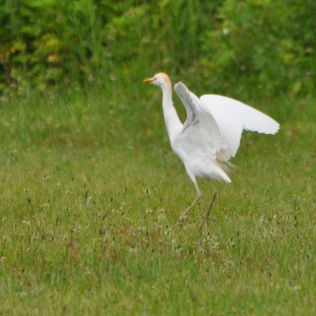 I was leaping along

I have a tail to tell

The herons and egrets that roost at Cow Meadow are super cooperative and often pose nicely for photographs. The long-necked, leggy waders are interesting and dynamic subjects, changing their appearance drastically whenever they stretch or scrunch. I was able to both Yellow-crowned and Black-crowned Night-Herons, Great and Snowy Egrets, and a surprise Tricolored Heron resting along the water’s edge.

A few Green Herons were moving around the area, shrieking loudly as they flew between perches. One pair was being extra affectionate, hanging out on the same branch and surveying the park together. The male broke off a twig and offered it to his mate, a gift to be used as nesting material. She nibbled at the present graciously, but left it in his bill as she took off, seemingly leaving him to carry it back home. 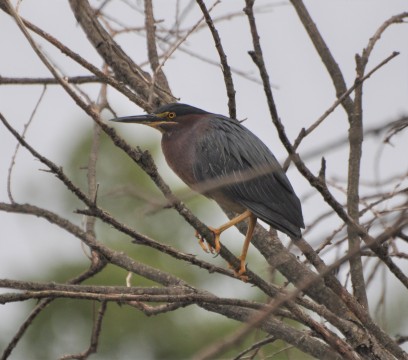 The heron we deserve 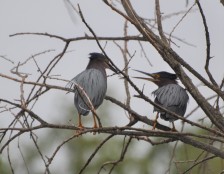 I continued onwards to Robert Moses State Park. With wind speed increasing as stormy conditions blew in from the southeast, I planned to do a seawatch on the offchance that any interesting pelagic species got pushed close to shore. The viewing conditions were fantastic, with unlimited visibility, but unfortunately the gusts just weren’t strong enough to produce a seabird show. I noted a young gannet when I first set my scope up under the overhanging roof, and at one point a distant scoter flew by. Apart from that, it was the usual suspects: cormorants, Ospreys, and the expected gull species. To be honest, most of the excitement was on the shore. There were a handful of Lesser Black-backed Gulls loafing at the parking lot, and I was entertained blackbirds foraging along the trash, gulls cracking crabs on the pavement, and Barn Swallows collecting nesting material. After nearly 3 full hours standing post, I called it quits. Despite the lack of dramatic sightings, I was still glad that I made the effort. Trying is half the fun! 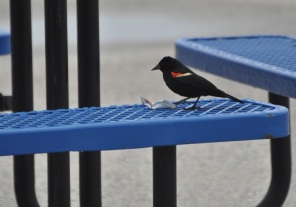 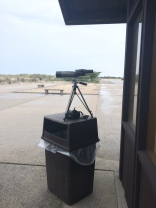 Something compelled me to drive a little further down the road as I approached the roundabout at the park exit. I went a little further east, heading towards the lighthouse and scanning the roadside. I passed a couple of deer, some rabbits, and a few families of birds before making a u-turn. As I began driving westward again, I noticed a mass of ginger fur laying in the grass along the shoulder. A young Red Fox! I quietly eased over to the edge of the asphalt and reached for my camera. The adorable little canine was contentedly noshing on some sort of morsel, posing beautifully for a photo shoot. After a few minutes, the kit rose to its feet and trotted away, looking back at me as it moved on. What a way to end the day!

Hot on the trail

When you’re the best of friends