This short phrase is a strange one at first glance. A single word takes up two-thirds of the sentence, acting as both the verb and the direct object. “Bird every bird” is an oft-repeated birder mantra, and a sound piece of advice. Rephrased, “you should properly exercise intentional, active birding practices on every bird you see.” When you’re a birder, you see a lot of birds. It’s easy to get desensitized to the common and familiar species, passing over the chickadees and crows. However, rare birds can turn up in any place at any time. Carefully sifting through hordes of geese and terns can prove very rewarding, and truly incredible finds can sneak up on you when you least expect it. On the other hand, letting your guard down or phoning it in when you’re out in the field can result in quality surprises slipping past you.

With the school year winding down, I was looking forward to celebrating my first Tuesday night in many months without any grad school class to worry about. I had plans to hit up bar trivia with my friends, but I wanted to get some fresh air first. There had been some rarity reports from along the South Shore throughout the day, so Miriam picked me up from the train station and we headed out to try our luck. Our first stop was Jones Beach, where a pair of Black-necked Stilts has been intermittently seen the past few days. I found plenty of eager explorers on site, but there was no sign of the leggy shorebirds. Word on the street was that someone had gotten a little too close for comfort trying to get a photo. The stilts had not been seen since they took off.

We decided to spend some time checking the swale, enjoying the local birds that were hanging around. Least Terns have resumed nesting in the roped off section near the parking lot, ferrying gifts of fish to their mates and squeaking loudly as they hover over the heads of passersby. They’re just as vocal about defending their territory as their larger cousins are, but their efforts are less aggressive and more adorable.

I only had my binoculars and Miriam only had her camera, but she was happy snapping pictures of Tree Swallows, Ospreys, and various non-stilt shorebirds as we waited by the water. Brendan, just back from the Bahamas, and Brent, still wearing work clothes, also showed up on the scene. We talked about our options and decided to use our limited time elsewhere. Each of us hopped into our vehicles and headed off towards Cow Meadow Park in Freeport, where a Cattle Egret had been reported foraging on the lawn. 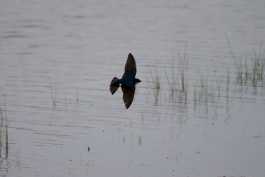 Our fortunes turned around at Cow Meadow. We were able to locate the egret on the far side of the pond, and Miriam enjoyed the antics of this latest lifer. Tree and Barn Swallows circled around us at close range, snagging insects out of the air and daring us to try photographing them. There were also plenty of confiding wading birds besides our intended target, including roosting Yellow-crowned Night-Herons, a few Great Egrets, and a surprisingly cooperative Green Heron. The tiny ardeid flew in close to us and began showing off on the low branches, stretching out its impressive neck to reach the water’s surface from above. 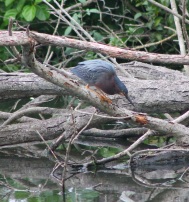 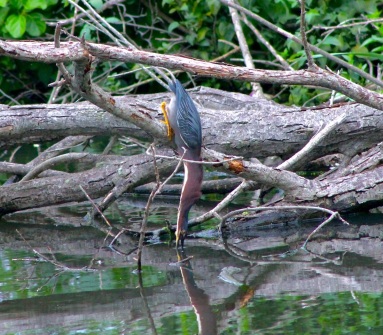 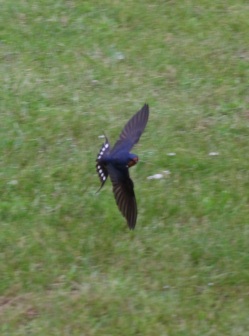 I said farewell to my friends and returned to the car, leaving with just enough time to make it to trivia on schedule. I picked up Miriam’s cameras and clicked through the images she had just captured. I paused on a photo of two ibis that had been perched by the pool when we arrived. The expected species on the East Coast is the Glossy Ibis, and they are quite common in the coastal saltmarshes of Long Island. Ordinarily, I pay special attention to these birds, checking them closely to confirm their identity. The Glossy’s western cousin, the White-faced Ibis, is an infrequent vagrant to our shores, and the two species look remarkably similar. After missing out on the Black-necked Stilts at the end of a long day, I was anxious to locate the Cattle Egret and score a win. In my haste, I passed over an even grander prize when I failed to look closely at the ibis. In fairness, I had inspected the face of one bird, but the second was preening and turned away at the time. I should’ve waited for it to lift its head! Miriam’s photos clearly showed that one of the dark feathered birds had a distinct border of white plumage around its bright red face. The legs and iris of the ibis were also warmly colored, contrasting with the cooler hues of its glossier companion. 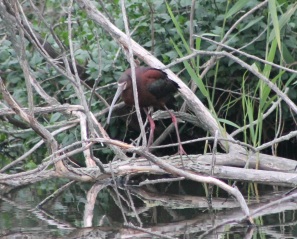 Feeling a bit red in the face

Don’t gloss over the differences

Drat. I felt pretty stupid for failing to recognize this individual due to my own carelessness, but the worst part was that no one besides the two of us got to see it. The birds had taken flight and circled the park shortly after we began exploring the area, and they had disappeared in an unseen direction by the time Brendan and Brent arrived. If I’d been aware enough to catch the rarity in the moment, I could have at least watched where it was headed so others would know where to begin searching. 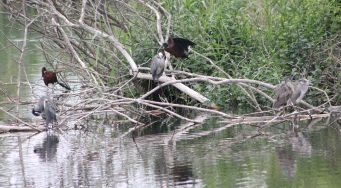 This is what I saw

Seconds after I looked away

On the other hand, I realize couldn’t have really stopped the bird from leaving. I got a year bird and a county bird out of the encounter, and Miriam enjoyed both the photo shoot with an unexpected lifer and the firsthand revelation that rarities really can pop up any time. These kind of delayed, after-the-fact IDs have become more common in the age of digital photography, and it’s kind of fascinating that technology has afforded us this retroactive superpower. There’s no denying, though, that it’s a happier ending when the bird is still around after the replay reveals the truth. Hopefully someone else is able to refind the ibis and redeem my foolishness. Some lessons have to be learned, and relearned, the hard way.