November is a season for rarities. The main waves of avian migration have already passed through, but there are plenty of stragglers still milling about. Strong storm systems and sustained periods of wind blowing in the same direction are fairly common at this time of year, and they can play a role in depositing birds far from their typical range. Sometimes, long-distance travelers simply get lost or follow the wrong leader, and they continue on their way until they reach strange new lands. The possibility of improbabilities is a powerful lure for birders, drawing them out into increasingly chilly conditions to survey the scenery for vagrants.

A lone individual far from home may stand out from the locals, but somebody still needs to spot it and recognize it for what it is. If an intercontinental visitor lands in a public park and no birder is around to ID it, it still exists. Naturalists and scientists place a great deal of importance on record-keeping: it collectively represents all that we know of what’s happening in the world around us. I’ve talked before about how technology has changed birding, and record-keeping has taken leaps and bounds in recent years. Improved interconnection and widespread access to personal photography equipment have made it much easier to document and share an observation that otherwise might have gone unnoticed by the community of interested parties.

2016’s “rarity month” started with a bang. I was sitting in the faculty lounge at work on Tuesday, November 1st when my Dad texted me the following photo.

The first picture was attached to a simple two-word text: “Pink foot.” I could tell from the background that it had been snapped at Hendrickson Park in Valley Stream, one of my father’s preferred places to bike. Unlike Valley Stream State Park to the north, Hendrickson has very little in the way of natural habitat, which leads to it being generally overlooked by birders. On eBird, I am documented as the individual with the most species ever reported there, and my total is on par with a slow day at Jones Beach. Due to its proximity to my home, a convenient bike path, and it’s short-lived status as the local Pokémon GO hotspot, I’ve spent more time there than most folks toting binoculars. I’ve encountered my fair share of goodies at this site over the years: Wood Duck, Yellow-throated Warbler, Common Raven, and even Greater White-fronted Goose. This bird, the Pink-footed Goose, was on a whole different level.

Dad was out for his morning ride, as recounted to me later, when he noticed a large flock of Canada Geese. They were smaller and lighter colored then the large local individuals, so he rightfully deduced that they were migratory individuals from a northern population. Being familiar with the Lost Goose Phenomenon, he paused to check it there was a Snow or something similar among them. A pair of bright pink feet gleaming in the sunlight stopped him in his tracks. He knew there was such a creature as a Pink-footed Goose, and he knew it was not from around here. My all-caps, punctuation-heavy response to his photos confirmed his suspicion that it was not from anywhere remotely near to here. 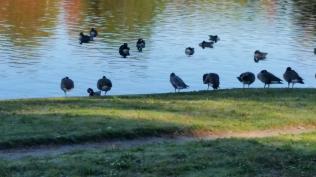 Out of the ordinary (credit: Dad)

The Pink-footed Goose is an Old World bird that breeds in Greenland, Iceland, and Svalbard. Flocks migrate to the British Isles in winter, and until about 30 years ago this species was absolutely unheard of on our continent. The first few Pink-foots to appear on our shores were met with incredulity, but this breed is not common in waterfowl collections and the recorded individuals had no signs of living in captivity. Since then, Pinkies have followed in the footsteps of the Barnacle Goose in becoming regular vagrants from Greenland each winter. A bird which was not even included in field guides as recently as the early 2000s is now somewhat expected on serious Northeastern birders’ year lists. It is still rare and good-looking enough to be a welcome find, and there has never been one recorded in Nassau. Suffolk is a good place for goosing, and even Queens has gotten in on the fun, but my home county had never noted its own Pink-foot. Until now.

I got the details from Dad about his discovery and sent them out to the community at large. My sudden news blast targeted the New York listserv, a local Facebook group, and Ed’s birder group text. A personal text to Brendan was met with profanity, and he immediately made plans to follow up on his lunch break. He found the bird with little trouble, stating that he owes the original finder a beer. Dozens of birders congratulated my dad and thanked me for spreading the word, and more positive reports from happy chasers came in throughout the day. It was all very exciting, but there was a snag. Tuesdays are the only day of the week that I have grad school obligations after work, so I wouldn’t be back on Long Island until about 10 PM. I talked to Brendan, Dad, and Miriam about possible strategies, and decided the park has enough light fixtures that it was worth stopping by late. After a busy day and an intense eductation class, Miriam and I finally made it to Hendrickson. Surprisingly, the binoculars were capable of picking up the color patterns of the geese on the lake despite the very low light levels. There were fewer geese present than others had reported earlier, and flocks continued to depart throughout our visit. By the time we left at 11, there were only about two dozen geese on the water and the Pink-foot was not among them.

Photo of the Author on-site at Hendrickson Park 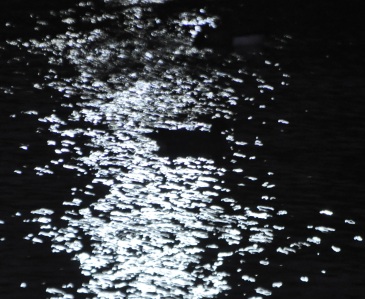 We all hoped that our target would return. Flocks of geese often move between several feeding and roosting stages in a given area, and you never know where or when they will turn up. Dad and I journeyed back to Hendrickson early the next morning, hoping to rediscover our friend from across the pond before my train to Queens. The sun had not yet risen when we arrived and began to scan. It was immediately apparent that many geese had returned to the park, and I soon noticed a paler individual floating on the dark water. Simulataneously, dad asked me to check the silhouette “between the two light beams.” When I lowered my binoculars, I saw that he was referring to the same bird I’d been looking at. The gradually brightening conditions revealed that it was indeed the Pink-footed Goose, and Dad had picked it out with his naked eye by silhouette before dawn. The shadowy picture above, which DOES show the Pink-foot, is an accurate approximation of what he could see at the time. He owns this bird.

My uncharged camera died as the sun rose, but I was able to snap some phone pics through the scope of a nearby birder who was happy to hear we’d found the goose. He’d flown in from the West Coast to see some Barnacle Geese upstate, but they’d disappeared and robbed him of his first North American sighting. The report of this bird convinced him to drive down, and we had the pleasure of pointing out a welcome lifer for him. It’s always great to help make somebody’s day, and that feeling of mutual enjoyment and connection is one of my favorite parts of birding.

Miriam had enjoyed our moonlit walk around the lake, but she was still hoping to meet the famous fowl. I coordinated with her to meet after work and lab so we could try again with some better lighting. The goose was reported absent at midday, but determined observers hung on and relocated it in the early afternoon. We set out on the trails of Hendrickson, scanning every Canada as we went. Sneaking up on some flocks resting along the western edge, I spotted the Pink-foot grazing adjacent to the path on the eastern side.

“There it is, across the lake!”

We strolled on over to the opposite shore, taking care to keep a respectful distance and avoid disturbing the bird. It was very alert and wary, pausing to eye us when we first walked up, but it seemed generally comfortable and content feeding on the grass with its Canadian cousins. I tried to take some more pictures through my own binoculars and let Miriam do the same, but I quickly noticed she knew something I didn’t. Comparing our first round of shots, hers were far superior. She has experience taking phone photos through a lens for microscopy in lab classes. For years, I’ve been holding the camera directly against the eyepiece, while the proper technique of holding them slightly apart is more challenging but provides clearer shots with a better field of view. I just learned a valuable lesson!

Dad’s discovery has been the main talking point of the New York birding community for the past few days, and as of this writing the Pink-foot continues to delight observers at Hendrickson Park. As with all wayward winged wanderers, I hope that this bird survives its journey and eventually continues onwards. In the meantime, get out to Hendrickson Park while the getting is good! It’s not every day that you get to see a goose from Greenland, and those highlighter-hued feet are a spectacle to behold. Thanks again, Papa Healy! This bird was an amazing find, made extra special by of the number of people who’ve gotten to share the experience.

UPDATE: The goose has continued to stick around, and I returned a few days later to take photos with a real camera. Check out the results…I’m pretty proud of myself.

15 Responses to In the Pink