Back-to-back long weekends in the midst of fall migration are a welcome gift for the non-retired birder. It had been a packed few days with New York Comic Con, grad school work, and socializing to keep me busy, so I was looking forward to getting out into the field. The weather forecast called for strong, consistent winds from the north throughout the night. It was looking good for a new push of migrants to take advantage of these conditions. I made plans with Brendan to explore Jones Beach, and I arrived well ahead of sunrise.

As dawn broke on the barrier beach, the birds came out to play. Sparrows that had scattered from the roadsides in my headlights hopped out of the shrubs to feed. A Northern Harrier passed by, struggling to stabilize against the wind, and chirping notes floated down from the skies above. Just as Brendan pulled up, a pair of familiar voices caught my attention. I turned to see a two Rusty Blackbirds in flight, watching as they dodged to escape the talons of a Merlin and dropped into the pine trees below. I took this sighting as a good sign, since this species is usually only seen as very occasional flyovers along the coast. As Brendan grabbed his gear and strolled over, the blackbirds took off and proceeded on their way. We followed their cue and set off to explore the area. 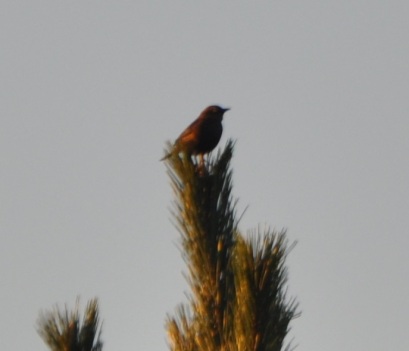 There were lots of birds on the move. The overall diversity was not notably high, with just over 50 species observed. However, the numbers were fairly impressive, and a few of the species represented were uncommon enough to spice things up. Rusties continued to pass over early in the morning. It seemed that nearly every blackbird we saw or heard was this rarer species, and we tallied about a dozen confirmed sightings. As we approached the turnaround, a shorebird called from overhead. I recognized the wavering whistle as an American Golden-Plover, and it sounded off several more times as it flew onward. Apart from a few Palms, a lone Redstart, and some unidentified flybys, the only warblers seen were Yellow-rumps, but they were everywhere. Purple Finch, Northern Flicker, Red-breasted Nuthatch, Golden-crowned and Ruby-crowned Kinglets, and White-throated Sparrow were other conspicuous constituents of the morning flight. Cooper’s and Sharp-shinned Hawks prowled the periphery of the foliage, with one of the former taking a pass at a Gray Squirrel as it crossed the road. 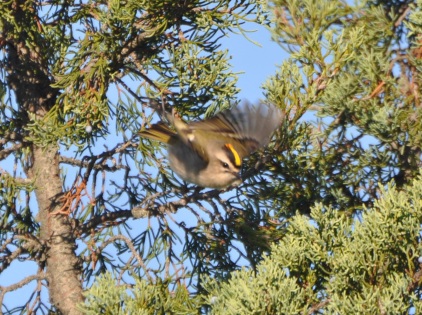 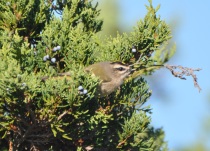 It’s good to be the kinglet

Back at the parking lot, Brendan and I checked in with the other birders who were milling about. Many of them had missed the early wave of Rusties, and the Golden-Plover had not appeared for anyone else. Some of them seemed bit letdown with the perceived lack of variety or rarity, but I fell back on my default, optimistic response that the day was still young. New batches of birds were still moving through, and we did our best to get on them all.

Every once in a while you have to stop and appreciate the ordinary stuff in the world around you. We took advantage of a lull in activity and began a photo session with the loafing Rock Pigeons. Say what you will about these ubiquitous little beasties, they’re tough as nails and wildly adaptable. Those crazed, orange eyes watch the world turn from city skylines on every peopled continent. 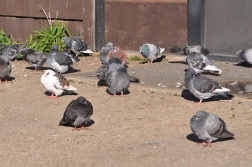 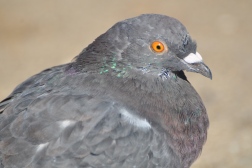 After a trip to the restroom, I stepped outside and was met by a flurry of pigeons headed directly towards me. They veered off, staying low, before circling back to buzz me again. Taking a hint from their behavior, I turned my gaze skyward and saw a Peregrine Falcon swooping over the rooftop. This was the second individual of the day, scattering gulls and pigeons alike as it wheeled in the sky overhead. The smaller Merlins were still on the hunt, picking off warblers and chasing flickers all over the park. Migration is a risky prospect as it is, and these fearsome aerial predators don’t make it any easier on the weary travelers.

How long has that been there?

We walked the backside of the hedgerow to search for sparrows, and when we came around we found Menachem, Steve, and a few other familiar faces. We paused to catch up and discuss how the morning was going. As we talked, Brendan noted a distant skein of Canada Geese with a smaller individual leading the way. Initially, I assumed it was probably a Brant, the expected mini-goose in our region. I’d seen my first flock of the season just after first light, and it was certainly possible one had gotten mixed up with some of the relatives. As the group drew closer, however, it became clear that this was something different. The goose in question was markedly tinier than its associates, and its brownish body gleamed in the sun with a pale, frosty cast. I caught a glint of sunlight reflecting off white cheek patches, just like the ones on a Canada Goose. The pieces started to fall into place, and I realized that this dinky, frantically-flapping bird was a Cackling Goose. The gaggle of geese ended up passing directly over us, and the Cackler showed every diagnostic field mark perfectly: more pointed, swept-back wings, shorter neck, stubbier bill, blockier head, white ring around the base of the black neck, and a black strip between the cheek patches. Even the lighter body plumage was visible with the naked eye. This sighting, a real rarity for Nassau, was uncharacteristically good considering how similar this species pair can be.

A goose on the loose

The Cackling Goose continued westward with its Canadian cousins, leaving delighted birders in its wake. We put word out on the listserv so others could keep an eye out for the unusual visitor, and after some deliberation Brendan and I headed with Menachem to the fields of Point Lookout, a popular goose hangout. We only found a few Canadas at first, but a text from Bob Anderson alerted Brendan to a larger congregation down the road that also included a lost Snow Goose. We couldn’t relocate the Cackler, and later learned that Doug spotted what was almost certainly the same bird maintaining its trajectory at Fort Tilden in Queens less than an hour later. Killdeer, kestrel, and Sharp-shin all put in appearances as we stood in the parking lot at Nickerson, but the stars of the show here were the Tree Swallows. A twittering swarm was constantly cycling through the area, repeatedly dipping in synchronized swoops to drink from a nearby pool of water. They eventually settled on the asphalt to rest, and we bid them farewell as we loaded into the cars. 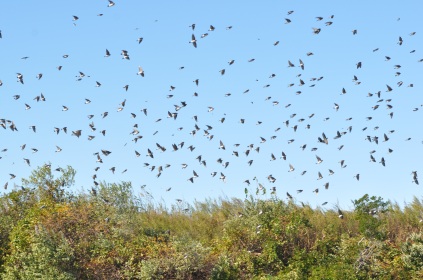 Take to the skies

I’d discussed a craving for hot cocoa with Brendan, so we stopped at a local cafe for some toasty mugs of chocolate goodness. The brunch offerings were pretty delicious, too, but it was hard to top the morning we’d had. The day we were expecting was very different from the day we got, but I think it absolutely worked out for the better. The surprise species encounters from our outing brightened a chilly, blustery Monday, and they served as a reminder that you never know what you’re going to get from Nature during migration!