As I closed in on the end of September, the three-quarter point of the year, I had a few noticeable gaps in my 2016 list. There were only two more birds to go until my self-imposed goal of 400, and I hoped I could clinch a few of the “easier” species before their window of availability closed. One of the most obvious misses up until this point was the Tennessee Warbler, a relatively common species that can be found throughout eastern North America during migration. I had failed to connect with an individual during the spring journey to the boreal forest, and I knew that in less than a month they would all be spread throughout the Neotropics. On Thursday, September 29th, Ed reported a Tennessee at Hempstead Lake State Park. The bird was apparently associating with a mixed flock of warblers that included about 10 species in total. I visited the park after work but found it dead silent in the still evening air. I resolved to return on Saturday morning to kick off the four-day weekend right.

I arrived at the lake shortly after sunrise. The birds had been reported from the stream bed alongside the picnic area. The lack of rain this summer had left this vegetation-choked water feature bone dry, and the spadderdock lilies were apparently hosting a high density of insects. This unusual food source provided a banquet for the migrant birds that were passing through, and they lingered for several days to feast among the pond plants. Dozens of birders assembled to view this unique sight, watching as birds that typically feed in the treetops scampered about in the mud at their feet. Most of the group was made up of Northern Parulas, with American Redstarts and Black-throated Blue Warblers showing in good numbers as well. We also found Yellowthroats, Ovenbirds, Waterthrushes, Yellow-rumps, Palms, Nashvilles, Black-throated Greens, and caught a glimpse of what could’ve been a Mourning Warbler initially reported with the flock. There were even Blackpoll, Magnolia, and Black-and-white Warblers in the trees nearby. Just about the only species that was a no-show was Tennessee. 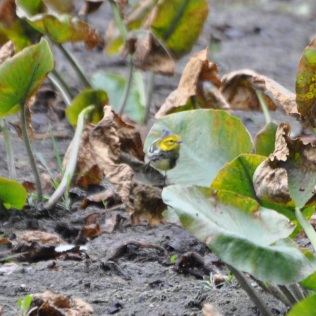 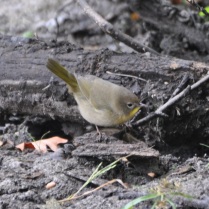 Poking in the mud

Close enough to catch the FLASH

I skipped over to Hempstead Lake every time I got the chance on Saturday and Sunday, spending about 10 hours in total on site. There was plenty of activity to be found every morning, though things tended to quiet down as the day progressed. Local raptor sightings included Great Horned Owl, Peregrine Falcon, Bald Eagle, and Red-tailed Hawk, with passing Cooper’s and Sharp-shinned Hawks popping by as well. A male Rusty Blackbird, slightly early in its migration, had staked the stream bed as a hangout for the weekend. When the Tennessee failed to turn up again on Sunday morning, I followed the advice of some seasoned birders who recommended Garvies Point Preserve as a reliable spot for the species and headed north. My first visit to these wooded trails was a lovely one, highlighted by the calls of a Common Raven and an Eastern Screech-Owl. Although I saw plenty of songbirds, local Ospreys, and some furry friends, my target remained elusive. 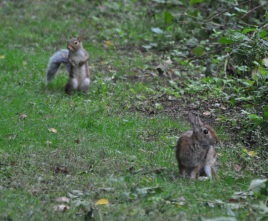 I went back to Hempstead in the early afternoon to search again. It was quieter, but I managed to pick out a long-overdue year bird skulking in the brush: a Winter Wren. This tiny, charming species was #399 on my list, which meant I had the opportunity to potentially choose the bird that would make my goal a reality. I was hoping for something that would lend a little variety to my “century birds”; Merlin, Altamira Oriole, and Magnolia Warbler. The Tennessee Warbler, which had been giving me a seriously frustrating runaround and would add a third songbird to my four milestone markers, would have to wait. It was time to visit Jamaica Bay.

What I missed, until later

One of the other “expected” species for my year list was the Eurasian Wigeon. This handsome Old World duck is a regular visitor to the coasts of North America in winter, and they typically turn up in Queens and Suffolk each year. Individuals often revisit the same pond annually and stick around for the whole season. I was banking on one to show up at the refuge, and a drake had been reported a few days ago. A large, aquatic species was just what I needed to spice up my milestones, and it is just uncommon enough to be suitably special. I made good time on the Belt Parkway, and my trek out to the East Pond was rewarded when I locked onto the bird in a distant flock of American Wigeons. The field marks were just visible through my scope, but it was a fine find for 400. GOAL ACHIEVED.

One of these blurs is not like the other

What of the difficult and dodgy Tennessee Warbler? I found out that the bird had been found again in a new spot at Hempstead Lake when I left for Garvies. Infuriating. In the end, I made a special trip into Central Park on Monday to follow up on some reports, and it worked out pretty well. I got some tips from city birders who’d seen a youngster feeding in a large willow tree along the shore of the Lake, foraging with other warblers at the wells drilled by a Yellow-bellied Sapsucker. I finally pinned down my quarry and spent some time admiring its acrobatic antics. As I meandered the trails out of the park, I stumbled into two more Tennessees at close range and eye-level. This is a ridiculous hobby…and I love every second of it.

To close out the long weekend, I started out before the sun on Tuesday. Radar images of migration had looked promising the night before, but the pre-dawn picture was much less exciting. Basically all of the birds on the move had passed by Long Island, and it looked like it would be an uneventful day. Since the only hints of radar excitement were in Suffolk, I first visited Robert Moses. It was all but devoid of avian activity, though the resident hordes of deer were out in force. 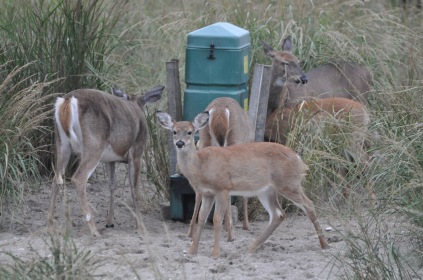 Fun for the whole family

I went to Jones mostly as a formality, a sense of obligation to check my favorite spot before heading home. When I stepped out of the car, I heard flight calls. Birds were moving after all, so I stuck around to watch. What had begun as a dismal, dreary day that threatened to close my mini-vacation on a low note turned out to be a surprising success. A pair of Caspian Terns were seen resting at the boat basin, and there were over a thousand Tree Swallows swarming the dunes. I walked out to the turnaround and found a White-eyed Vireo, my first at this location, chasing a Blue-headed Vireo through the shrubs. The distinctive, flatulent call of a Dickcissel echoed from the brush along the outer turnaround as I watched the pursuit unfold. Even as I was about to leave, I was waved down by Stacey and Kurt, who had discovered a mystery bird near the coast guard station fence. I got on it and informed them that they had a young Blue Grosbeak, a new bird for my home county. Content with the personal records broken and adventures had over the weekend, I returned home and prepared for the coming work week. 2016 is feeling mighty fine!

A Storm of Swallows