Man on a Migration Mission

In the world of year listing, a birder is bound by the constraints of the seasonal cycle. You only have so many opportunities to locate a bird in the proper habitat at the correct time of year. On the plus side, you get to double-dip winter, which often proves beneficial due to annual variation in wildlife movements. Summer, on the other hand, has to be finished in one continuous run. If you fail to find a migratory species in the spring, you best hope you get to catch it when it comes back the other way. Some birds only reach the Atlantic coast with regularity during their southbound migration, providing a short window to connect with them in the fall.

I was acutely aware that I had some cleaning up to do for 2016. Missed migrants and seasonal specialties were starting to crop up as September marched along, but for many this was my last chance to pencil them into the list.

Autumn is a time for vagrants and wanderers. Worn-out breeders and inexperienced youngsters sometimes make wrong turns in transit, and the increasingly strong storms leading into winter often blow birds off course. Some species are more prone to these detours than others, and a few are expected to turn up in our region each year. As I walked the fisherman’s road at Jones Beach during a Monday morning flight, I heard an electric, splatting buzz coming from the brush. I knew this unique call well, and I was eventually able to get a visual on its source: a Dickcissel. 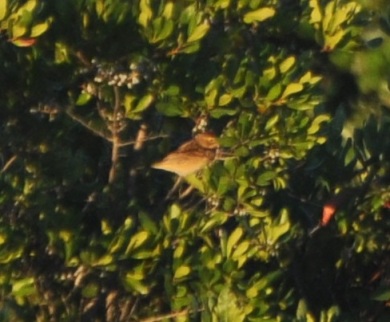 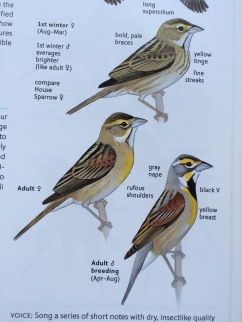 Dickcissels are commonly found on the plains of America’s interior, and they migrate to South America in massive flocks. Individuals and small groups often stray to the East Coast, where they typically keep the company of House Sparrows. They sometimes stick around into the winter, as a bird in Babylon did in late 2015. I failed to make that chase this January, so I was thankful to have discovered my own Dickcissel for the year list.

After a night of favorable winds, the conditions at sunrise were looking good for a flight of migrants. Apart from the Dickcissel, there were dozens of Bobolinks passing overhead. Warblers were showing in some numbers, though only a few touched down to forage in the park’s eye-level scrub. I spent several hours combing Jones, but most of the activity had quieted down by 8:30, with a majority of the passage birds continuing onwards. Birders who arrived later failed to relocate my Dickcissel, though Brendan heard what was probably the same individual later in the week.

The morning’s other highlight came when I turned my binoculars on an aerial dogfight between several apparent Merlins over the turnaround. To my surprise, one of the birds was a Common Nighthawk. These aerial nightjars pass through southern New York in a relatively brief period of time, and I had planned a dusk trip to the North Shore knowing it was one of my last shots to get them before they were gone. This sighting saved me the trouble, and the bird continued on its way to the west. 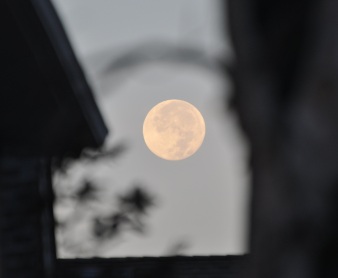 Mid-September is the peak period for the Philadelphia Vireo, an adorable and uncommon migrant in this area. If you don’t see one by about the 20s, the likelihood of finding one goes down enough that you can more or less write it off. A midweek cold front brought an influx of these little birds to the Island and the City, with reports coming in from over a dozen sites. On Thursday, Ed found an individual at Hempstead Lake. Brendan and I made chase as soon as work ended, but failed to locate any sign of promising avian activity. I went home and Brendan dashed off to successfully nab a pair of Blue Grosbeaks on the North Shore. During my Friday morning commute, Brendan reported that he’d refound the Philly on a pre-work search. There were also several individuals, as well as Tennessee Warbler and Red-headed Woodpecker, reported in Central Park during the day, but when I arrived in the afternoon the trees were frustratingly silent. Skunked again, and the window was closing.

Mustering all of my determination, I awoke before the sun on Saturday. The harvest moon was still sinking in the sky and the first rays of light were beginning to peer from the opposite horizon as I loaded up the car. Hempstead was quiet at first, with only the local dogwalkers to keep me company. When the sun finally began to warm the foliage, the insects stirred and the birds came out for breakfast. I spotted tanagers, catbirds, warblers, and finally some vireos. Warbling Vireos, a related lookalike, were still singing in the treetops, and the larger, more-common Red-eyed Vireos were foraging together in the dense tangles…and there it was. 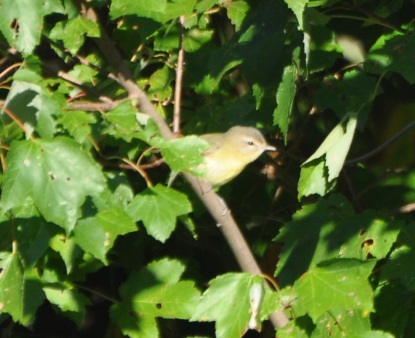 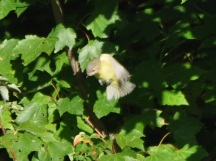 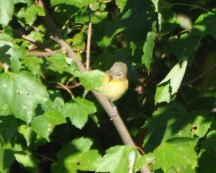 The Philly was still working the same area where it had been seen the past few days, picking its way through some head-height leaves in loose association with the other birds. It showed well in the early morning light, allowing me to check off the important field marks and enjoy its acrobatic antics as it fed. As the warmth of daylight spread to fill the park, the concentration of birds thinned out and they dispersed to seek food elsewhere. With only three birds for remaining for my 2016 goal, I returned home and eventually settled in for a much-needed nap.