We emerged from the low-lying fog of San Francisco Bay around the same time that we started to see signs for Point Reyes National Seashore. I visited the Point in 2005 with my family, and I was looking forward to exploring the area more thoroughly with friends. Our arrival at the Bear Valley Visitor Center was met by a chorus of calls echoing from the nearby brush. I stopped to admire the covey of California Quails before continuing on to the visitor center. 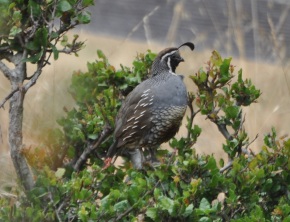 On the first day of Christmas…

A helpful ranger at the front desk provided us with a map and some tips on where to see wildlife and great scenery. I also picked up a sweatshirt celebrating the centennial of the National Park Service. Following up on the recommendations, Dylan, Aly, and I hiked the nearby Earthquake Trail and visited the reconstructed village of Kule Loklo. There were plenty of critters to be found, including Black-tailed Deer and Fence Lizards. Steller’s Jays and Pine Siskens flitted among the branches, and I caught sight of some Pacific-slope Flycatchers, a long way from where I last encountered the species.

We finished up in Bear Valley and began the drive to the Point itself. A winding road led us through pastures and hills with cows to keep us company. One ranch hosted a flock of blackbirds feeding in an open field. My East Coast birder brain dismissed them as Red-wings as we drove by, and I realized too late that they could’ve been Tricolored Blackbirds, a West Coast endemic and potential lifer. All of the Red-wings I’ve seen in the region were the California “Bicolored” subspecies, and these birds had pale edges to their red epaulets. Unfortunately, I didn’t get a close enough look to distinguish between light yellow or buffy white, and I found no other blackbirds throughout the day. An important naturalist’s lesson learned: assume nothing and inspect even the expected.

As we approached the coast, the fog found us again. The cliffs at the lighthouse overlook plunged downward into the Pacific Ocean. The far-too-familiar smell of seabird guano hit my nostrils, wafting up from the rocks below where Pigeon Guillemots and Common Murres nested. Some of the alcids were still hanging around the area, but with the breeding season winding down the crags were mostly empty except for roosting cormorants and pelicans.

White-crowned Sparrows hopped about the parking lot while Rock Wrens fluttered across the cliff faces. Pacific, Common, and Red-throated Loons were all seen floating in the coastal waters off the Point, and Peregrine Falcons patrolled the land’s edge in search of prey and intruders. The Turkey Vultures riding the updrafts were less hurried in their comings and goings, casually soaring by without so much as a flap.

Wren on the Rocks

We took a turn down Chimney Rock Road to visit some of the most famous residents of Point Reyes, Northern Elephant Seals. These massive pinnipeds have been visiting the park’s beaches since the 1970s after a previous absence of over 150 years. Hunting had drastically reduced their numbers, but the seals are rebounding and taking back the block on the California coast. The breeding season takes place during the winter and early spring, but individuals return throughout the year to molt. The population apparently undergoes molt in shifts based on age and sex, and in late summer it’s time for the adult males to haul out. Although the beachmaster/harem drama of courtship is long over, the big lugs were doing plenty of posturing among themselves. The blubberous beasts lounged about, dwarfing nearby Harbor Seals, as they bellowed and burped at each other. One particularly vocal individual was floating in the surf, and his echoing, belching calls provided amusement and giggles for the assembled human onlookers.

I will sing you the song of my people

We left the Point and headed southeast to Muir Woods. I was afraid that this popular tourist destination, so close to San Francisco, would be too much of a zoo to fully enjoy. We had to park half a mile up the road from the entrance, but flashing my volunteer park pass for free entry made me feel like a VIP. With my friends feigning an appropriate level of awe, we navigated through the crowds and set off down the trail. There were definitely some clueless or disrespectful guests present, but my concerns about appreciating the legendary forest amidst the chaos were completely misplaced. Words fail to adequately express how stunning the mighty Coastal Redwoods truly are. Photos are only slightly more effective, but we had an amazing afternoon exploring the woodlands. 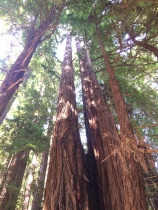 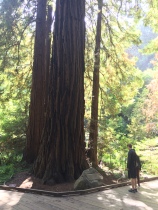 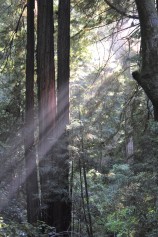 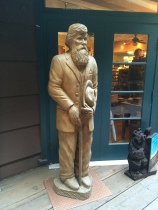 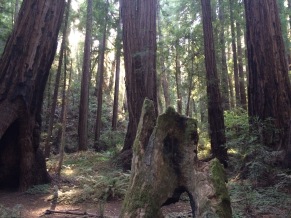 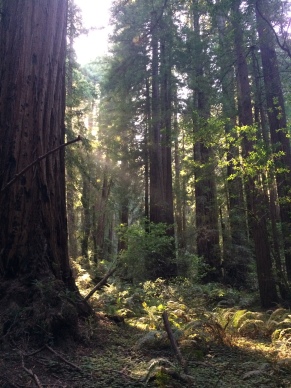 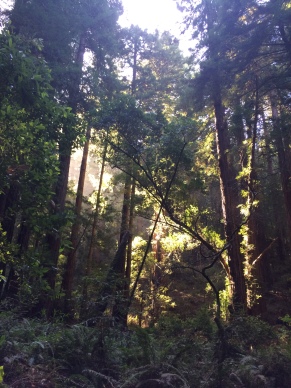 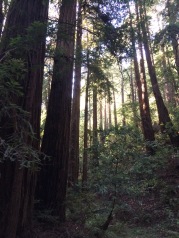 The world is quiet here 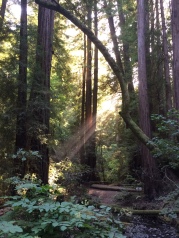 A bolt of light 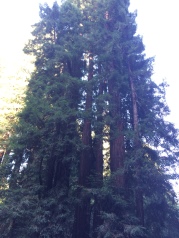