Songs of Summer in Suffolk

With school over until fall and temperatures rising to seasonal highs, it’s easy to give into laziness at this time of year. My first academic cycle as a full-time teacher is complete, and it feels great to have that achievement under my belt. For the past week, life has revolved around celebration and relaxation. Beaches and backyards host parties for every occasion, and it’s a welcome change of pace to kick back and enjoy the days off. While Long Island naturalists often bemoan the summer doldrums as they wait for southbound shorebirds to return in numbers, there is still some treasure to be found in our local forests and fields.

I decided to follow up Independence Day with a run into Suffolk to pick up some specialty breeders that I had not yet seen for the year. The grassland habitat of Enterprise Park at Calverton, also known as EPCAL, is home to some species that are very rare or unknown elsewhere on Long Island. These individuals have been around for months, but my general disdain for driving aaallllll the way out to Suffolk meant that I still had a handful of relatively easy adds waiting for my 2016 list. Sometimes being a bit lazy pays off.

In the wake of an overnight rainstorm, I set out to pick up Tracey for some long overdue birding. Our arrival at EPCAL was greeted by birdsong floating across the abandoned, grassy runways: mockingbirds, meadowlarks, and sparrows. As we made our way towards the main vantage points at Grumman Boulevard, I stopped to perform the age-old nature lover’s ritual of helping a turtle cross the road. This Eastern Box Turtle was plodding along the pavement near a railroad crossing, so I thought it best to move him into some more suitable habitat before continuing on.

No. 3 here may have dreams of NASCAR

Here’s Tim Healy with the assist

One of the primary targets for a visit to the rural roads of Suffolk is the Grasshopper Sparrow. This search did not take long, and the buzzy-voiced birds were our constant companions during our stay. Most of the elevated perches rising from the sea of stalks were topped by sparrows who would dash for cover as soon as they felt camera lenses on them. It was challenging to get satisfying views of these distant songsters through the gaps in the border fence, but Tracey and I were fortunate enough to stumble upon a recently-fledged chick. This sparrowlet had apparently not yet perfected its sixth-sense for detection and subsequent disappearing act, and so it stayed put for us to admire at length. 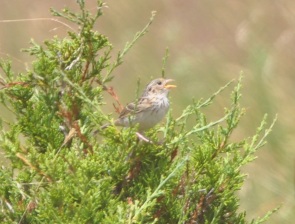 There were a variety of critters to be seen along the roads, despite the midday, early July heat. Some of them, most notably the resident deer, were a bit skittish…

…but others were, to our joy, more cooperative. Several kingbirds scanned for insects from the fence, goldfinches flitted past, and vultures lazily looped overhead. A Common Wood-Nymph butterfly lit on a nearby log to pose for a quick photo. I led Tracey in search of a Yellow-billed Cuckoo that we heard calling at the edge of the woods, and I was surprised how easily we were able to get a visual on her 200th life bird. 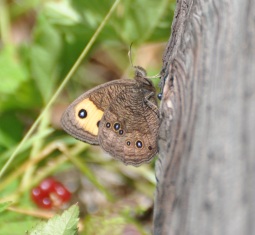 The main goal for the trip was an encounter with the Blue Grosbeak. This striking bird is a characteristically southern species which is quite uncommon in New York. Although they may turn up at coastal sites during migration, they have only recently colonized Long Island as breeders and are found in a very few toehold locations. We looked and listened for the song of the gorgeous male, but came up empty on this outing. While checking the fringe of Line Road, I spotted a brown bird with a blocky beak and crisp wingbars. She fluttered up to some branches and interacted with an apparent fledgling individual before vanishing. I hoped to get Tracey a better view of this species, and after careful searching we finally spotted a grosbeak bathing in a puddle not far from where we originally glimpsed our quarry.

We bid farewell to EPCAL and swung past the nearby Calverton National Cemetery. We spied some interesting signs, watched an Eastern Wood-Pewee vigorously defend its turf from a marauding Blue Jay, and heard the ringing song of an Ovenbird. Crows, waxwings, and thrashers rounded out our day total before we parted ways and I returned home, driving aaallllll the way back to Nassau.

The Watcher on the Wall

2 Responses to Songs of Summer in Suffolk