As migration draws to a close, a naturalist’s focus turns to local breeders and summer visitors. Long Island supports a variety of different organisms living in a number of different habitats. I’m very familiar with the animals that call the region home, but there are some areas not far from the NYC area that feature creatures not found in this portion of the state. Many City and Island birders make their journeys upstate as the excitement of May wraps up, traveling to the Catskills, Adirondacks, or any of the countless lakes dotting the countryside. Brendan and I made a short-range trip to Tuxedo, NY last spring, and we decided to continue the tradition this year.

Armed with a bag full of snacks and a special driving playlist, we set out early in the morning on May 28th. Less than two hours later, we had arrived at Sterling Forest State Park. This woodland, surrounded by sleepy towns and roads that rush past without a hint of stopping, hosts a number of living things rarely seen elsewhere in New York. Located just within the state border, it is essentially an extension of more classically-southern habitat extending through New Jersey. We briefly stopped at the visitor’s center before heading to the park’s premier birding site: a power line cut at the end of Ironwood Drive.

A cut above the rest

One might wonder why, in the midst of this landscape relatively untouched by New York’s urban sprawl, birders would flock to an area altered by man. As it happens, the clearing of trees to provide a path for the power poles also created new habitat for wildlife. Many types of flora and fauna thrive in successional, forest-edge habitat, and Sterling’s Ironwood Drive is some of the best in the region. The low, dense foliage of the cut is maintained by workers who, in periodically pruning the plants, keep Ironwood from reverting to forest. The primary prize at this location is the Golden-winged Warbler, a handsome species that is particularly picky about the habitat where it nests. Any sighting of the bird in migration around NYC and LI is a red letter day, but the population at Sterling makes the park one of the most reliable places to see the warbler in the whole state.

Birders of a feather

Our exploration of the power line cut was accompanied by constant birdsong. Indigo Buntings, Yellow-throated Vireos, and Field Sparrows provided a lovely soundtrack for our adventure. At several points throughout our trip, Brendan and I heard the buzzy tune of the Cerulean Warbler wafting down from the canopy. These tiny, treetop stunners are often hard to spot and even harder to photograph, but despite getting only fleeting glimpses we were plenty pleased to hear them singing. We were also fortunate to hear the vocalizations of a few Empidonax flycatchers, which are notoriously difficult to identify by sight alone. Willow and Acadian were both confirmed by ear on this outing.

The day began to heat up early in the morning, and the thermal activity brought raptors soaring overhead. We scanned through them in the longshot hope of finding a Mississippi Kite, but we only managed to find expected species. Several Bald Eagles circled overhead among the Turkey Vultures, and we also witnessed a dogfight between Cooper’s and Red-tailed Hawks. Red-shouldered and Broad-winged Hawks were also heard calling from above. 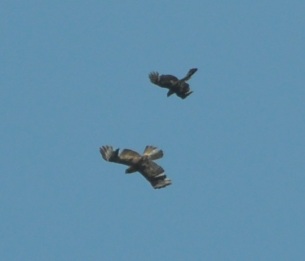 The high temperatures and strong sunlight kept many birds skulking in the shade. It also made photo opps a bit challenging, and my efforts were plagued by awful backlighting and contrasting shadows. Although the pictures came out a bit rough, we were treated to great views. Both Black-billed and Yellow-billed Cuckoos were heard repeatedly, with the former showing quite nicely. Hummingbirds zipped along above the bushes as Eastern Kingbirds gathered materials for their nests.

In addition to Golden-wings, Sterling is home to the closely-related Blue-winged Warbler. This species is a bit more of a generalist about its habitat, and it has expanded its range into areas formerly inhabited solely by Golden-wings. Due to their similar physiology and breeding behavior, individuals sometimes interbreed and produce viable hybrids. The crossbreeds are so distinct that they were once considered separate species, and we encountered two male “Brewster’s” Warblers, each singing the song of a different parent. In many places, Blues have begun to push the Goldens out, while in others a delicate balance has seemingly been struck between the sister species and their hybrids. The fascinating ecology of this species complex is being studied and monitored as it develops and shifts each breeding season.

Evidence of an interspecies tango

The back of a Black-bill

Hempstead Lake later in the day

Fortunately, we also found a number of pure Golden-winged Warblers defending territory at Ironwood. The dashing, dapper birds sang their buzzy songs from shaded limbs and flitted about through the leaves, popping up quite close to us and slipping away just as quickly. It’s a real treat to watch these tiny gentlemen in action, but they are not easy photo subjects. The masterpieces below are the best I could manage with the equipment and conditions, but I think they capture the spirit of these delightful, fast-paced birds. 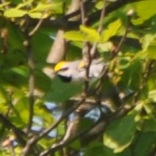 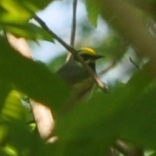 I’ve included some plates from the Sibley Guide to Birds below for those who want clearer looks at our highlights from the day. Brendan and I had a very successful outing, tallying over 60 species in a few short hours. The trip to Sterling Forest is often extended with a visit to Doodletown Road at Bear Mountain, but we were short on time and had connected with all of our targets. We bid farewell to the birds of Ironwood Drive and turned the car south towards Long Island, making great time on the way home. Another wonderful spring day, and summer is definitely on its way!

The wonderful world of Empidonax

Not an easy shot

2 Responses to A Sterling Roadtrip