I awoke on Saturday to find that dreary, gray weather had settled in over Long Island. Despite the cold temperatures and forecast of rain, I refused to bundle up when I headed down to the south shore. I did not want to admit that I needed my winter coat in April, and my stubbornness left me shivering for the better part of the day. Unfavorable wind conditions have put migration mostly on hold, and the early morning was very quiet between Jones Beach and Captree. There were no signs of new arrivals, and many of the smaller landbirds were laying low. At times it seemed like there were more birders than birds, but this afforded me the opportunity to catch up with a number of familiar faces.

The action picked up a bit as the morning continued, but the conditions grew colder and wetter as well. I spotted a Harbor Seal drifting through the boat basin: always a welcome sighting. Many of the Common Loons that wintered here have transitioned into their striking breeding plumage. After snapping some pictures of the dapper divers, I drove east down the Ocean Parkway towards Suffolk. The cooperative Upland Sandpiper was seen working the median at Oak Beach, strutting through the grass in search of food. I managed to find another uncommon visitor in the form of a Tricolored Heron which had been reported at Captree Island that morning. This was my first-ever sighting in New York state, although I encountered the species earlier this year in Texas. A Red Fox quickly darted across the road, and the heron took off to the southwest after filling its belly with fish. I decided to race the rain and try to add a splash of color to my gray day, so I turned my car towards Freeport.

I pulled into a lot at Merrick Road Park, a small public space next to the entrance of Norman J. Levy Preserve and Preserve. Although the transformed landfill at Levy has some nice natural areas, Merrick features little more than a ballfield and some bleachers. That being said, it still hosts a notable creature that makes it worth the occasional visit. As I pulled up to the park, I was greeted by raucous screeches ringing from bundles of branches on the stadium lights overhead. Several birds dropped from the nests and took flight: bright green comets with brilliant blue flight feathers. This location and several other parks in the area are home to thriving colonies of Monk Parakeets. 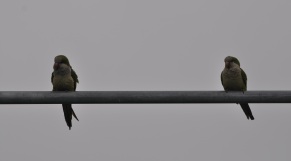 A pair of parakeets 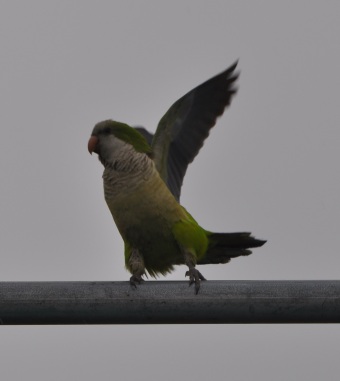 This species is, quite obviously, out of place. What’s a classically tropical bird like a parrot doing in New York? The full story behind their origin is clouded by local legends and urban myths, but there are a few factors that help explain their presence here. Monk Parakeets, also called Quaker Parrots, are native to temperate regions of South America. The birds began to appear in the New York City area in the 1970s as escaped individuals established colonies. Some claim that a crate full of parakeets was accidentally opened, or lost off a truck, or released by smugglers to avoid trouble with the authorities. Many Monks were illegally trafficked into the United States, and its possible that shipments were lost in such a fashion. A less dramatic alternative suggests that series of escapes from private owners gradually bolstered the numbers of free-flying birds over time. Regardless of the murky details of their backstory, the parakeets eventually spread throughout the NYC area and made themselves comfortable. Many other cities from Massachusetts to California are also home to naturalized flocks of these colorful foreigners. Monk Parakeets are considered established and countable by the American Birding Association, showing just how well the birds have taken to their new surroundings.

I strolled around the ballfield, watching the parakeets gather twigs from the nearby trees. They chewed off pieces of branches using their powerful beaks, ferrying them back to the lights and to a small, worn-out shack where they had set up shop. Unlike other parrot species, Monk Parakeets build their own nests instead of breeding in tree cavities or cliff crevices. They construct large communal structures that support several families, and this has proved a valuable adaptation against cold temperatures. The elaborate nests are well-insulated and made up of multiple chambers, allowing the birds to snuggle together and remain cozy throughout our bleakest winters. Real estate matters, too, and parakeets often build nests on power poles and light fixtures that provide some extra warmth. This sometimes pose a fire hazard, which puts these invaders at odds with power companies. Their loud vocalizations sometimes frustrate human neighbors, but there are plenty of others who are charmed to have parrots living nearby. 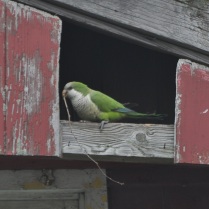 Despite the bitter cold of the wind and rain, the birds were quite active and noisy. They seemed unperturbed by my presence, continuing their business of nest building and socializing. Small groups whizzed past me as they circled the area, and one pair flew in to perch on the bleachers ahead of me while I took photos. It feels strange to watch parrots cavorting about while icy rain freezes your fingers. These enterprising little birds have made a home for themselves in a strange land, and enjoying them is more or less guilt free by the standards of introduced species. Despite initial fears, they have not set out in an unstoppable wave of destruction to spread across the country as so many invasives before them have. Although they are sometimes blamed as agricultural pests in their native range, their impact in the United States is mostly limited to inconvenience of noise or nest placement rather than wholesale ecological disruption. It’s a funny, frenzied world, and somehow this unlikely species has found a way to survive in a human-dominated landscape far from the motherland. In the absence of native spring color, I was thankful for the entertainment provided by the parakeets on this cold, gray day. I expect that I’ll be visiting their colony again soon.

2 Responses to Grays and Greens