You know you’re up early when the local parks are still closed. Col and I arrived at Anzalduas Park in Mission with more than an hour until official opening time. Unfortunately, the area outside the gates was not especially conducive to waiting around. Anzalduas is notable for its location on a bend of the Rio Grande which loops in such a way that Mexico is on the northern bank. As a result, visiting the park technically puts you south of the border. Patrol officers were on high alert in the area, cruising the roads adjacent to the water and the farm fields. We decided our best option was to push Anzalduas back in the queue and first head for our second planned stop. We turned the car around, passing a Black Phoebe flycatching for breakfast, and drove off with the rising sun at our backs.

We passed the exit for Bentsen, traveling an additional hour and change westward to the town of Salineño. This location has a prime birding hotspot located right along the shore of the Rio Grande. Mexico is little more than a stone’s throw from the boat launch, and the riverside habitat draws in some species that are rarely seen anywhere else in the United States. Our schedule change meant that we arrived on the scene earlier than originally planned, which meant more time to search for the specialties. We briefly scanned the river, checking in with some other nearby birders who said nothing noteworthy had been seen…yet.

A short stroll brought us to the storied Salineño feeders, a setup maintained by volunteers with a soft spot for the local birds and a surplus of lawn chairs. We settled in to enjoy the hungry visitors. Green Jays bounced from feeder to feeder, blackbirds picked the ground like windup toys, and the raucous chorus of chachalacas echoed from the Mexican side of the river. There were several Altamira Orioles, dressed to the nines in brilliant orange, dining on nectar, fruit, and a special concoction of peanut butter, cornmeal, and lard. A somewhat different bird suddenly appeared, sporting lemon-yellow plumage and a black hood in place of a bib. This was the Audubon’s Oriole, one of our targeted Salineño specialties. It snapped up a few morsels of the signature feeder food, blessing us with beautiful views before returning to the woods. 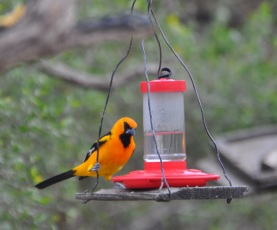 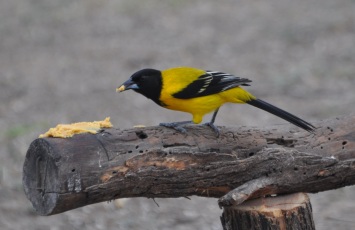 Back down at the river, we set about searching the reeds for White-collared Seedeater. I’d spotted this adorably wee species on a golf course in Cancun back in 2014. As I explained to Dylan at the time, birders bend over backwards trying to see seedeaters along the south Texas border, so it was a real treat to find them so easily under such agreeable circumstances. That being said, I was eager to get reacquainted with the species in a more natural setting, and it would also be a lifer for Col. The best places to find this bird in the States are actually even further north and west of the LRGV in Zapata, but a pair had been showing at Salineño with regularity recently. The riverbank looked like a scene from The Big Year, with dozens of birders straining to catch a sight or a sound from their quarry. Col and I had made friends with another pair of wanderers at the feeders, and upon reaching the boat launch we found familiar faces from the past few days in the Valley. There was also a WINGS tour group present, and the leaders were intently focused on the cane lining the shore.

With so many expert eyes and ears hunting for the birds, we unsurprisingly caught wind of them fairly quickly. Someone heard a chirp, someone else saw a fluttering shadow, and before long we had zeroed in on the tiny tanagers moving through the reeds. The male flew upriver and dropped into cover, flashing his white wingbars as he passed, and the female hopped up onto a relatively unobstructed branch before taking off downstream. Not everyone in the crowd had gotten a satisfying look, as the views had been decent but brief. One of the WINGS leaders remained optimistic. “He went that way, she went the other way. If he’s anything like me, he’ll be right on her tail.” His prediction proved true, and the male seedeater soon returned to show off in front of us, delighting his assembled admirers.

High above the crowd

So much fuss for such a little bird

Another pair of birds flew in to the riverside trees, showing bright red highlights and strange, parrot-like bills. I called out to Col that we’d finally found our Pyrrhuloxias. We’d been on the lookout for these curious cardinal cousins throughout our trip, and until now we kept coming up short. Our fortunes certainly shifted this morning, and throughout the day we continued to encounter these birds in the desert and scrub habitat we visited. 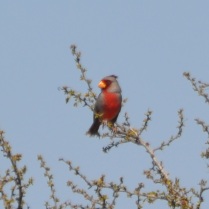 Singing from a perch

As we prepared to leave Salineño, word started to spread that someone at the boat launch had seen Red-billed Pigeons flying down the Rio Grande earlier. Even the locals at the feeder were surprised by this observation, since the pigeons are rare in the winter, usually showing up as spring rolls around. Nice find! Hold on…the birders at the river had seen “nothing of note” before Col and I arrived and scanned the area, and the Red-bills certainly weren’t present while we searched for the seedeaters. Doing the math and asking around, it became apparent that the birds had to have flown by while we were at Salineño, probably only minutes after we left the water to check the feeders. Damn it. Can’t win them all, I suppose.

We proceeded west to Falcon State Park, a dry area along a lake that features great desert habitat. The sun was climbing high by the time we arrived, and we set out on a 3-mile loop trail around the park. Although we spotted a few new species for the trip, including Black-throated Sparrow and Blue-headed Vireo, most of the avian activity was limited to mockingbirds and Yellow-rumped Warblers, both of which were frustratingly abundant. I got in touch with Ben for some tips on good locations to check, and although his advice was great the midday heat was putting a damper on wildlife sightings by the time we reached the campgrounds and roads he recommended. A down-and-back tour of Salineño Shortcut, affectionately called the Dump Road, failed to turn up anything of note. Ben had described an array of sparrows, gamebirds, ravens, and multiple roadrunners, but we could’ve counted the birds seen on one hand. Col suggested that we take a break for lunch before checking these locations again, so we stopped at a roadside drive-through. I got to test my Spanish while ordering our meals, and the chili cheese fries we purchased were exceptionally tasty. A final loop through the campgrounds showed a slight increase in activity, and we spotted the WINGS tour leaving nearby Starr County Park. Following their lead, we found a male Vermilion Flycatcher and heard Cactus Wrens singing. Our final pass on the Dump Road was rewarded with a close roadrunner crossing and our life Scaled Quails. Not a bad way to close out the quieter portion of our day.

We finally returned to Anzalduas late in the afternoon, with only 40 minutes until the park closed. Although we were tight on time, I thoroughly enjoyed this birding this agreeable, easy location. A previously-reported Greater Pewee failed to show, but we did discover an exciting little mixed flock that included my first Black-throated Gray Warbler. We returned to McAllen to watch for birds coming to roost at sunset, and we spotted a kingbird on a wire while en route. Col had never seen either of the expected species, so we pulled over to tackle this tricky ID. I was reasonably confident based on proportions and color that I knew which option we were looking at, and when a second bird showed up the first reacted with classic Tropical Kingbird calls to confirm my suspicions. Our final sunset in the Rio Grande Valley found us in an open lot, admiring the scenery as the local wildlife headed to bed. We followed suit shortly after dinner, satisfied with the successes our last full day in the region. 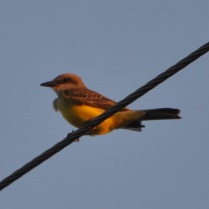 A recent graduate (Cornell '14) and lifelong explorer cataloging my thoughts and travels.
View all posts by timhealz →
This entry was posted in Uncategorized. Bookmark the permalink.